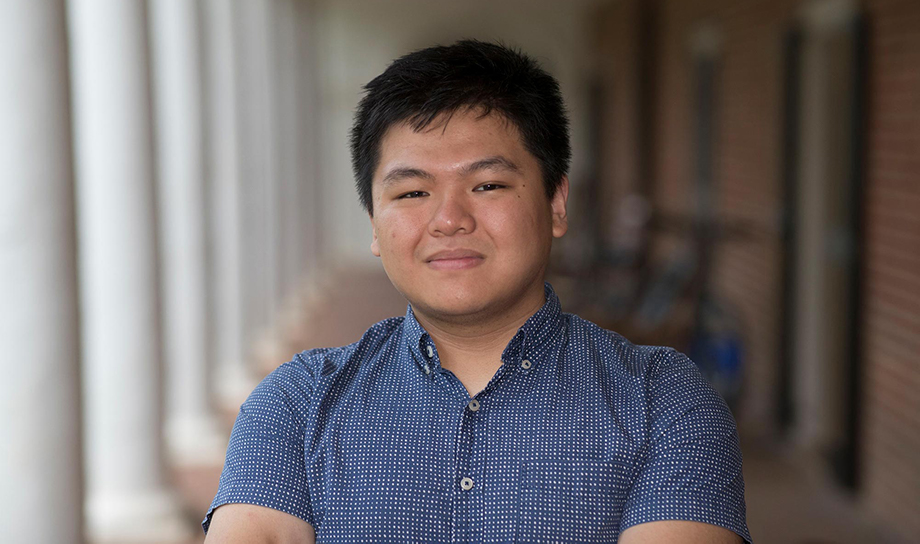 As Jonathan Zheng concludes a highly distinguished undergraduate career, it is safe to say his star has shone brightly at UVA Engineering. The graduating fourth-year chemical engineering major’s latest accomplishment is the coveted School of Engineering Outstanding Student Award. The award is given to a student or students — typically graduating fourth-years — who have demonstrated outstanding academic performance, leadership and service. It is one of UVA Engineering’s highest student honors.

Zheng, who is also minoring in materials science and engineering, arrived at UVA in his first year with research experience at the Massachusetts Institute of Technology and the U.S. Naval Research Lab. Almost immediately he joined the catalysis lab of William Mynn Thornton Professor Robert J. Davis, and from there embarked on an extraordinary undergraduate journey.

Chemical engineering professor and chair of the department William S. Epling concluded a description of Zheng’s research, academic and leadership credentials for the Outstanding Student Award selection committee by saying, “However, there are still other aspects of Jonathan’s career that stand out. He is a short story author and ‘dabbles’ in music. He is helping produce a video for the Department of Engineering and Society to promote science, technology and society in the curriculum. Jonathan is the well-rounded student, a traditional UVA goal.”

Zheng’s achievements at UVA include the prestigious Goldwater Scholarship and an Astronaut Scholarship. He is a Tau Beta Pi, Robert Thomson and Rodman scholar; a member of the Raven Society and Lawn resident; and the recipient of UVA chemical engineering’s 2019 Excellence in Research Award and 2020 Excellence in Leadership Award, a Double Hoo award for mentored research and a nanoSTAR Undergraduate Research grant.

In addition to his research in Davis’ experimental lab — and more recently in assistant professor Chris Paolucci’s computational modeling group — Zheng’s resume includes a National Science Foundation Research Experiences for Undergraduates internship at the University of Texas at Austin and interning at ExxonMobil and a local biomedical venture company. His research has been published in the American Chemical Society’s publication ACS Catalysis, a high-impact journal in the discipline.

Wherever he has gone and whatever he has done, Zheng has impressed those who work with him.

“Jonathan essentially participated in my lab activities as if he were a graduate student,” Davis said. “He attended all of our weekly group meetings and worked independently in the laboratory. I encouraged him to seek other research and work experiences throughout his undergraduate career so he can make well-informed decisions about his future. He interned at both ExxonMobil and Contraline to see first-hand the differences between a large multi-national company and a small start-up company.”

Shane Larsen, Zheng’s supervisor at ExxonMobil used words such as excellent communicator, resourceful, caring and adaptable to describe him. “Jonathan exceeded our expectations during his internship and added value equal to that of our experienced full-time research employees,” Larsen said.

“He has courage to follow the scientific process wherever it leads him rather than accepting conclusions (even from ‘experts’) when those conclusions are not supported by observable data. This was illustrated in his correction of a long-held belief on our team that a certain chemical was ineffective at curing our rubber product. Jonathan proved that it was effective when used properly, and taught our entire team a great lesson regarding drawing conclusions.”

Zheng has achieved all this while also serving in a dizzying array of leadership positions at UVA — including a year as editor-in-chief of The Spectra, UVA Engineering’s research journal, a big task by any measure. He also served as vice-president of the American Institute of Chemical Engineers student chapter, treasurer of Omega Chi Epsilon Chemical Engineering Honor Society, president of the Tau Beta Pi Engineering Honor Society, president of the Society of Asian Scientists and Engineers at UVA, committee officer of the UVA Undergraduate Research Network and a committee member of the UVA Engineering Student Council.

“Jonathan possesses an enviable combination of academic excellence and mature leadership skills,” Prpich said. “I have taught three cohorts for each class, and I can confidently state that no student brings together this combination of skill quite like Jonathan. He is a truly outstanding student and worthy of this award.”

Accolades come often to highly accomplished people, but Zheng accepts them with the grace of one who knows, as he put it, “education is not a solo venture.”

“I would be a very different person without having had such a wonderful support system at UVA,” said Zheng, who is off to MIT in the fall to start a Ph.D. program in chemical engineering.

“I want to say thank you to all my friends, who stuck with me through weekends at the libraries; my professors and mentors, who encouraged me to take on tough challenges; and to all the members of the University community, who inspired me daily to keep learning. I am proud to call myself a UVA engineer and even prouder to be graduating among a cohort of such bright, kind and passionate people.”