All members of the School of Engineering and Applied Science come together in small groups at the start of every year for the Common Reading Experience (CRE) to enjoy a lively discussion about a book or movie selected by the CRE committee. Through the CRE, we will foster a culture of belonging and inclusion in our community, and also to promote our shared goals of equity, and discuss the role of engineering and technology in the modern world.

This year the CRE committee has selected "Subtract: The Untapped Science of Less" by Leidy Klotz.

"The human drive to invent new things has led to pathbreaking achievements in medicine, science and society. But our desire for innovation can keep us from seeing one of the most powerful paths to progress: subtraction. Engineer Leidy Klotz says sometimes the best way forward involves removing, streamlining and simplifying things." Hidden Brain Podcast 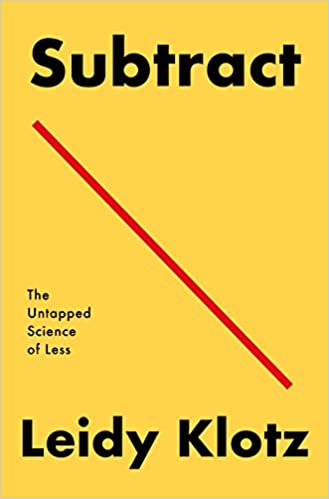 We selected the following books for the CRE in recent years:

Prior to the Engineering School CRE, the University selected the following books for faculty-student discussions: