We develop new or improved catalytic materials by studying how the structure of a catalyst affects its performance in chemical reactions. 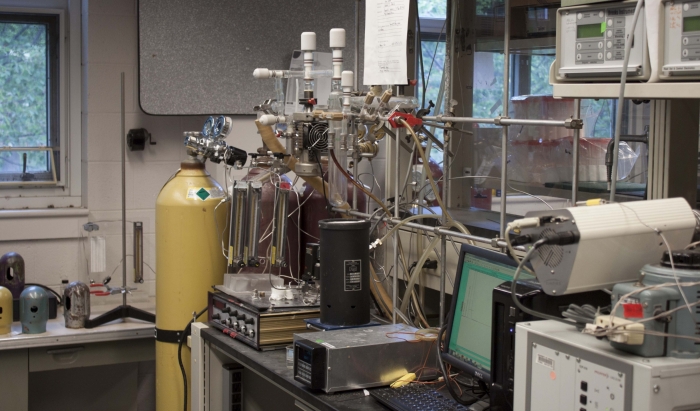 Recent work from our group has demonstrated the viability of solid bases and mixed acid-base materials as catalysts for the upgrading of light alcohols to high energy density fuels. This is achieved via the Guerbet coupling reaction, which increases the carbon chain length of these alcohols while producing water as a byproduct. Investigations into the mechanisms by which metal oxides and metal phosphate catalysts couple alcohols have provided two proposed routes in the literature: non-oxidative coupling and tandem dehydrogenation/ hydrogenation with aldol condensation. Resolving the contributions of one or both mechanisms to the observed selective synthesis of coupled alcohols over various metal oxides and metal phosphates is the current focus of our research. Recent studies on ethanol coupling over magnesium oxide have shown that surface ethoxides reside on 50% of available Mg–O pairs at reaction conditions, and acetaldehyde is a primary reaction product. The influence of catalyst composition and structure on alcohol coupling is explored using in-house materials synthesis, surface property characterization (XPS, DRIFTS, adsorption, microcalorimetry), bulk property characterization (elemental analysis, XRD) and steady-state kinetic studies. Multi-product steady-state isotopic transient kinetic analysis is also used to monitor transient kinetic phenomena arising from steady-state reactant switching from unlabeled to 13C-labeled reactants as seen in the figure below. This technique allows us to quantify important kinetic parameters such as surface coverages of reactants and reactive intermediates, surface residence times, and intrinsic turnover frequencies.

Endothermic fuel cracking represents a possible solution to the thermal management challenges that arise with vehicles during high supersonic and hypersonic flight speeds. Endothermic fuel cracking operates as a heat sink by using both the heat capacity of the fuel as well as the heats of reaction of various hydrocarbon cracking reactions. Zeolites are excellent solid acid catalysts for the catalytic cracking of hydrocarbons, but they also deactivate from coking at relatively short reaction times. Thus, it is necessary to develop alternative non-zeolitic solid acids that are thermally stable under supercritical fuel cracking conditions. Zirconia-supported semiconductor oxide nanostructures (WO3/ZrO2 and Nb2O5/ZrO2) have been shown in the literature to exhibit Brønsted acidity, which is necessary for catalytic cracking to occur. The major goal of this study is to determine fundamental structure/property relationships that will allow for the rational design of novel solid acid catalysts for hydrocarbon cracking reactions. Currently, our work is focused on screening WO3/ZrO2 and Nb2O5/ZrO2 catalysts to identify an active and stable catalyst for hydrocarbon cracking reactions under supercritical conditions. A combination of X-ray diffraction (XRD), electron microscopy, spectroscopic materials characterization (XAS, Raman, UV-vis), and analysis of adsorbed species (IR, microcalorimetry) is being utilized in this work to understand the nature of the catalyst active site.

Biorenewable resources such as carbohydrates are alternative feedstocks for the production of oxygenated chemicals. In some processing schemes, conversion of carbohydrates involves the initial hydrogenation of a simple sugar, such as glucose, to the sugar alcohol sorbitol. The subsequent hydrogenolysis of sorbitol yields lower molecular weight polyols like glycerol, propylene glycol and ethylene glycol, along with organic acids such as lactic acid. Glycerol, which is also a byproduct from biodiesel production, reacts further to glycols and lactic acid. All of these reactions are typically conducted in the aqueous phase in the presence of a supported transition metal catalyst. Our group is investigating a variety of monometallic (Ru, Pt) and bimetallic catalysts (Pt-Ru, Au-Ru, Pt-Re) for the hydrogenolysis of glycerol. Interestingly, Re promotes the activity and shifts the selectivity of Pt to produce some 1,3 propanediol, which is not observed over monometallic catalysts. Extensive characterization of the metal catalysts by microscopy, X-ray absorption spectroscopy and chemisorption is a major component of this work.

Decarbonylation and Hydrogenolysis of Fatty Acids

Fatty acids found in natural fats and oils are potential feedstocks for biorenewable fuels and chemicals. However, the presence of oxygen in fatty acids decreases its quality and stability, especially for fuel. Therefore, removal of oxygen from biorenewable fatty acids is needed to enhance fuel enthalpies, decrease viscosity, and enhance thermal stability. In this work, we are studying deoxygenation reactions in which the oxygen from the carboxylic acid is removed via production of CO2 and/or CO, thus producing a linear hydrocarbon. Fatty acids can also be converted into fatty alcohols for use in detergents, lubricants, and biofuels. In this work, we are interested in studying the mechanism for removing a single oxygen from a fatty acid functional group, leaving behind a 1-ol compound. As part of our participation in the Center for Biorenewable Chemicals (CBiRC), we are exploring the roles of metal-support composition and reaction conditions on the activity and selectivity of transition metal catalyst for the fatty acid deoxygenation and hydrogenolysis reactions.

Adipic acid is a valuable monomer for the production of nylon-6,6, which is widely used in the textiles, plastics and automotive industries. The current production of adipic acid from fossil resources is not renewable and produces substantial amounts of greenhouse gases. Thus, the production of adipic acid from renewable feedstocks with an environmentally benign reaction chemistry is an attractive target. Our strategy is to develop effective and stable oxidation catalysts for the selective oxidation of 1,6-hexanediol, which can be derived from fructose. We have studied the kinetics of diol oxidation over supported Pt as a function of Pt particle size, carbon support, alcohol structure, and start-up conditions. Ongoing work focuses on the modification of the catalysts to increase their stability and activity.

B.N. Zope and R.J. Davis, “Inhibition of Gold and Platinum Catalysts by Reactive Intermediates Produced in the Selective Oxidation of Alcohols in Liquid Water,” Green Chem. 13 (2011) 3484-3491.

In the petrochemical industry, ethylene is produced by the steam cracking of feedstock such as ethane and naphtha. Cracking occurs by free-radical reactions at high temperature (Typically above 800°C). Although the hydrocarbons are diluted by steam and the residence time is very short (<1s), the steam cracking reactions are always accompanied with coke formation, which eventually deposits on the walls of the reaction coils. Coke deposition is undesired because it reduces heat transfer, increases pressure drop and decreases the selectivity of the reaction toward ethylene. Coke can be removed by oxidation of the solid with dioxygen, which is the same reaction used to remove soot particles from diesel engine particulate filters. A major goal of this project is the exploration of ceria-based materials as potential catalysts for solid carbon oxidation reactions.

In recent years there has been growth in the supply of natural gas, and methane, the primary component of natural gas, represents a significant potential feedstock for the production of chemicals and liquid fuels. A catalyst capable of the conversion of methane to a valuable commodity chemical such as methanol is therefore highly desirable. Despite intensive research efforts, no industrially-viable catalyst for this reaction has been found. In 2005 it was discovered that Cu-exchanged zeolites could convert methane to methanol with high selectivity at low temperature.1 The overall reaction is a cyclic process involving high-temperature oxygen activation and water-assisted methanol desorption at lower temperature. Recently, the first example of catalytic conversion of methane to methanol with dioxygen using Cu-exchanged zeolites was reported.2 Our work in this area is focused on elucidating the structure of the catalytic sites, understanding the relationship between catalytic and stoichiometric sites, and developing methods for increasing the density of the catalytic sites. The potential use of molecular copper complexes anchored to solid supports for the methane-to-methanol reaction is an important part of collaborative research with the Gunnoe group in the Chemistry department.
1. Groothaert, M. H., Smeets, P. J., Sels, B. F., Jacobs, P. A. & Schoonheydt, R. A. Selective Oxidation of Methane by the Bis (μ-oxo) dicopper Core Stabilized on ZSM-5 and Mordenite Zeolites. J. Am. Chem. Soc. 127, 1394–1395 (2005).
2. Narsimhan, K., Iyoki, K., Dinh, K. & Román-Leshkov, Y. Catalytic Oxidation of Methane into Methanol over Copper-Exchanged Zeolites with Oxygen at Low Temperature. ACS Cent. Sci. 2, 424–429 (2016). 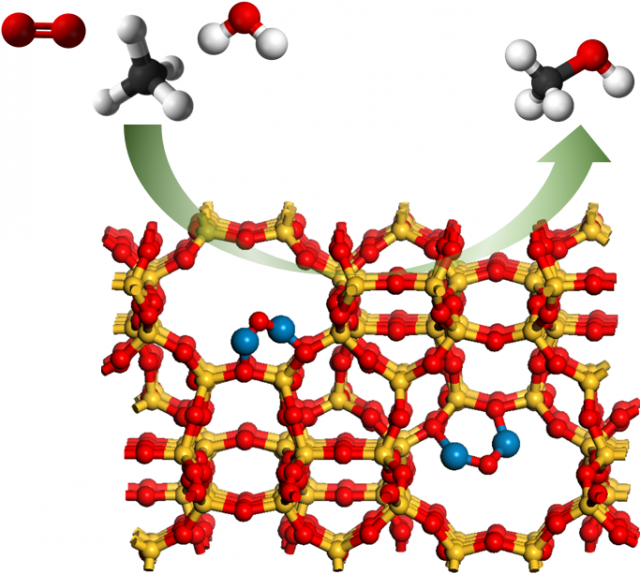