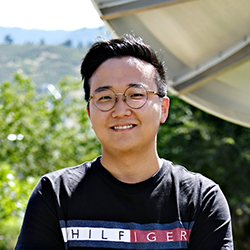 Hyunglok Kim, a second-year Ph.D. student in the Department of Engineering Systems and Environment, has been selected for NASA’s first class of Future Investigators in NASA Earth and Space Science and Technology. His research proposal was one of only 59 accepted for the new Future Investigators program in the earth science funding division. The maximum award is $135,000 over three years.

Kim is working with Professor Venkat Lakshmi, who joined the Engineering Systems and Environment faculty in 2019, as his principal investigator. The project is “Diurnal Soil Moisture Using Satellite Observations and Data Assimilation.” Kim said he wanted to investigate the topic because he believes it offers critical — and surprising — insight to improving our knowledge of Earth’s climate systems.

NASA peer-reviewed 428 earth science proposals and a total of 966 proposals that were submitted in response to the inaugural Future Investigators in NASA Earth and Space Science and Technology solicitation, according to the website. Four funding divisions in the Science Mission Directorate at NASA Headquarters — earth science, heliophysics, planetary science and astrophysics — provided oversight for the peer review process.

Read more about this research in UVA Today.