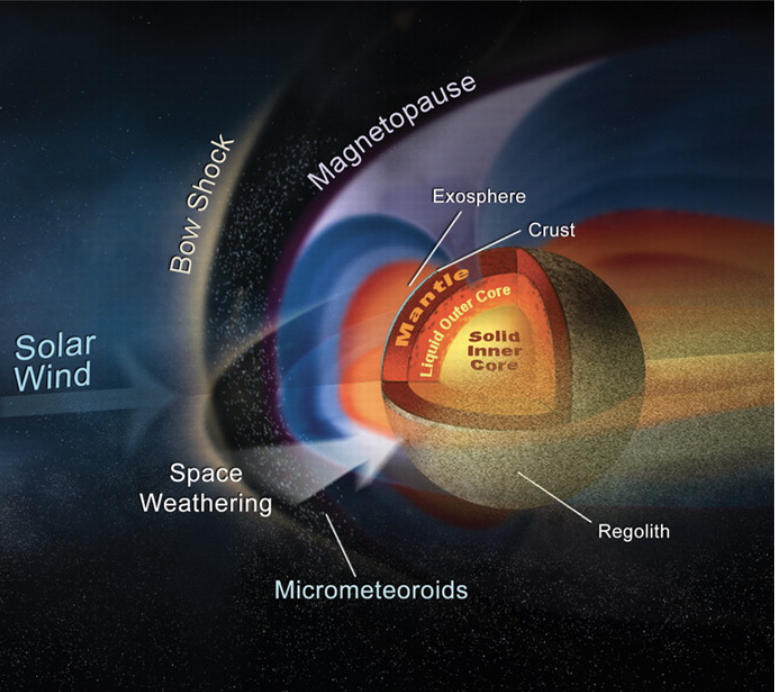 Determination of sputtering and desorption cross sections for metal species relevant to the exosphere of Mercury & other airless bodies: Laboratory measurements

The conditions on the surface of the planet Mercury are similar in some ways to that of Earth’s Moon. Both have rocky crusts made up mostly of silicate minerals, daytime temperatures are significantly warmer than those found on Earth, and both have very thin atmospheres due to insufficient gravity and proximity to the sun. This type of tenuous atmosphere is called an exosphere, which on Mercury extends from space all the way down to the surface of the planet. It is generated mostly by the interaction of the sun with the planetary surface materials, as well as bombardment by meteors from space and the radioactive decay of elements within the crust. Particles from the sun – photons, electrons, and charged atoms called ions – directly impact the soil on Mercury’s surface. Energy is transferred from the incident particles, ejecting molecules & atoms from the soil topmost layer. This results in a multi-component, thin, diffuse layer above Mercury’s surface. This soil-derived exosphere contains metal-volatile species of Na, K, Ca, Al, Mg, Fe, and Mn, in varying amounts, which have been observed by telescopes on Earth and by orbiting spacecraft. Thus, our knowledge of Mercury’s exospheric dynamics is based on observational data that feed numerical simulations, utilizing physical parameters precisely measured in the laboratory. At this time, there are only a few experimental measurements for the release of sodium and potassium from the surface that are available, with no systematic data for all metal-volatile species. This grant will provide critical laboratory data needed to (1) improve interpretation of telescopic and in situ orbiters/landers of phenomena observed at Mercury, (2) update and improve dynamical models of spatial and temporal variations in the exosphere, and (3) provide input into predictive exospheric models for as yet unobserved airless planetary bodies such as asteroids or comets.