Congratulations to Mary Lou Soffa, Owens R. Cheatham Professor of Sciences, on being awarded the School of Engineering and Applied Science Distinguished Faculty Award in recognition of excellence in teaching, research and service. She has published over 175 articles and has directed 32 Ph.D. students to completion, half of whom are women. 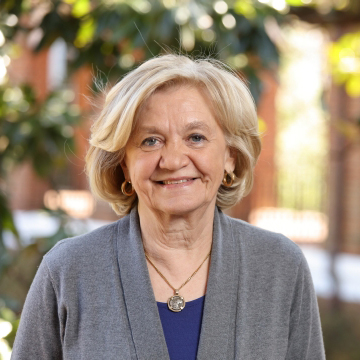 Her contributions to the Department of Computer Science include serving as the department chair from 2004 to 2012, chairing the promotion and tenure committee, playing a critical role in getting Rice Hall approved, as well as extensive activities supporting diversity, equity, and inclusion.

Soffa is an ACM Fellow and IEEE Fellow. She has received countless prestigious awards through her career, including: the Presidential Award for Excellence in Science, Mathematics and Engineering Mentoring in 1999; Girl Scout Woman of Distinction in 2003; the Computing Research Association Nico Habermann Award in 2006; the Anita Borg Technical Leadership Award in 2011; the Ken Kennedy Award in 2012; and, the ACM SIGSOFT Influential Educator Award in 2014.

Soffa has served on the Executive Committees of both ACM SIGSOFT and SIGPLAN. She was also a member of the Computer Research Association Board for ten years and served on the ACM Council from 2000-2016. Currently, she is on the ACM Publication Board and serves on conference program committees.