In Charlottesville, Va., Craig H. Benson is best known as an accomplished researcher and dean of the University of Virginia School of Engineering. Around the globe, he will go down in history as the engineer who developed a brilliant way to use natural processes to prevent landfills from leaking pollutants into groundwater. 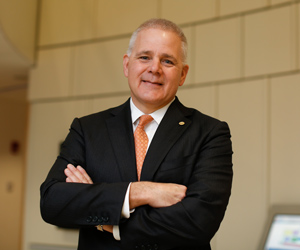 “I want people to think of me as an environmental gatekeeper – someone who saw the need for a natural world that is clean and healthy, and who also saw the need for an economy and industries that allow us to thrive,” Benson said. “People who make a difference understand that we can have both.”

His passion is inspired in part by his upbringing. He grew up in an industrial area of Pennsylvania where he could see firsthand how businesses and communities could benefit from technologies that would improve profitability and quality of life. He also observed how uncontrolled industrial emissions could cause severe damage to the environment.

One focus of his work is designing extremely long-lasting containment systems for municipal, hazardous and radioactive wastes, and by long lasting, he means 1,000 years or more. His team developed the technology for natural landfill covers, now used around the world.

“If you drive by a landfill or other underground containment system, the top two meters – about six feet – involve a highly engineered system,” Benson said. “It just looks like grass, but it’s super heavily engineered.”

In the past, the most common methods for covering landfills included clay or synthetic materials, designed to prevent rainwater or groundwater from getting inside. Water that flows into underground waste becomes contaminated, and when that liquid inevitably leaks back out into the environment, it pollutes groundwater and soil.

“All the previous methods were best the day you built them and slowly got worse and worse,” Benson said.

His answer was to stop fighting nature. He developed a method called a water balance cover, in which the vegetation and soil topping a landfill work together to release excess water into the atmosphere during growing seasons. This evaporation process minimizes the rainwater percolating through the soil, which means there is less water getting contaminated and leaching out of the landfill. The method sounds simple, but it takes an entire textbook and at least a three-day seminar to explain the specialized engineering behind it.

“Our approach optimizes nature’s hydrological processes, which is much more economical for companies and communities that operate waste containment systems,” Benson said. “People all over the world are using these methods and procedures, and that’s incredibly gratifying.”

Another important focus area for Benson’s work is discovering ways to recycle and reuse industrial byproducts for construction.

“Manufacturing of construction materials is very energy intensive, so we can use the industrial byproducts that we would otherwise throw away,” he said.  “The amount of energy and excess carbon we can reduce by doing this is just remarkable.”

When he joined UVA as dean of the Engineering School in 2015, Benson brought his vision for creating and disseminating knowledge that will make the world a better place, and for training future engineering leaders who will continue the pursuit of discovery for the public good.

“We are fortunate to have in Craig a leader who brings the same inventiveness he demonstrates as an engineer to leading UVA’s School of Engineering and Applied Science,” said UVA Executive Vice President and Provost Thomas C. Katsouleas. “This recognition for his work to ensure groundwater quality is well deserved, and we are proud of his election to Fellow of the NAI.”

Benson is a member of the board of directors for Virginia’s Commonwealth Center for Advanced Manufacturing, a partnership of industry, government agencies and universities that is dedicated to boosting the economy by developing and implementing cutting-edge manufacturing technologies.

“Craig embraces a holistic and interdisciplinary approach to his work, focusing on research that is grounded in basic principles, but has practical application that is important to practicing professionals, our industry, and our economy,” said Joe C. Campbell, UVA’s Lucien Carr Professor of Electrical & Computer Engineering. Campbell, who was elected to the National Academy of Inventors in 2015, nominated Benson. “He is a remarkably dedicated educator and servant to his profession, and he engages with industry to solve practical problems using elegant and economic solutions.”

In a letter of support for Benson’s nomination, David E. Daniel, deputy chancellor of the University of Texas System and a renowned environmental engineer, said Benson “is unquestionably the top academic researcher in the U.S. in the field of environmental geotechnology. His publication list is extraordinary. He has won essentially every prize there is to win for excellence in research and dissemination of research findings.”

Benson’s formal induction will take place during a ceremony in Washington, D.C., in April.

“I am very honored,” Benson said. “This organization is made up of people who put ideas to work. They are doing things that actually make a difference in the world, and that’s really important.”