Jill S. Tietjen Honored for Being a Role Model

UVA Engineering Alumna Jill S. Tietjen, P.E., who was inducted into the Colorado Women's Hall of Fame in 2010, is featured in a new video series produced by the Hall of Fame and Rocky Mountain PBS. The series is called "Great Colorado Women," and Tietjen is among the first of more than 100 women whose accomplishments will be detailed over multiple seasons.

"These stories provide role models to remind women and girls; men and boys, that they can aspire higher to reach their dreams," the Website for the series says. The video featuring Tietjen first aired Feb. 22, and can be seen here. 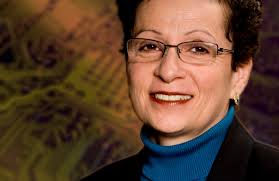 Tietjen, who is president and CEO of Technically Speaking, Inc., also was honored last fall with The General Palmer Award, given to an engineer who has made a significant contribution to Colorado, received recognition in the community, made advancements in the engineering community, and made an impact on future generations.

With more than 40 years in the electric utility industry, Tietjen has made significant contributions to the engineering industry through her consulting career, volunteerism and service on several board of directors for various associations and firms. She is a member of the UVA Engineering Board of Trustees. Described by the Colorado Woman’s Hall of Fame as a powerhouse, author, speaker and electrical engineer, Tietjen has worked to raise awareness of infrastructure issues and has been an advocate for women in the engineering field.

Notable career accomplishments include providing expert witness testimony on behalf of electric utilities before the Federal Energy Regulatory Commission (FERC) and numerous state commissions, serving as an accreditor on behalf of the Institute of Electrical and Electronics Engineers for five years and serving on the Engineering Accreditation Commission for five years, serving on the Colorado State Board of Registration for Professional Engineers and Professional Land Surveyors for eight years (two years as Chair) and donating her time as the national president of the Society of Women Engineers. She was the first woman to serve on the board of directors at the Rocky Mountain Electrical League (RMEL) and was also its first female president.

In addition, Tietjen mentors young woman in the technology and engineering fields, and has established national and local scholarships for women in those fields. In her role as a series editor for the Springer Women in Engineering Series, she is providing a platform for women to document their work in science and engineering.