In May 2006, President George W. Bush’s staff decided that photos of the president shopping at a neighborhood store would be a great way to highlight his confidence in the economy. Their obvious choice was Frager’s Hardware, a Capitol Hill institution that was co-owned by Edwin Copenhaver III (CE ’66) and John Weintraub (Col ’65). Although located in a big city, Frager’s has all the attributes of a small-town hardware store, qualities that have enabled it to fend off larger competitors for almost 100 years. It is a staffed by veteran employees who can steer customers to the exact item they need---out of the 40,000 in its inventory—while dispensing helpful advice. 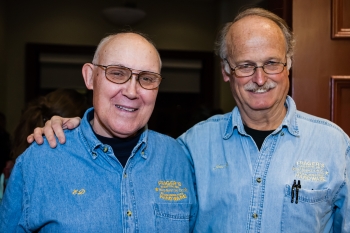 Although Copenhaver was closely associated with his East Capitol Hill community—he was known throughout the neighborhood as Mr. Ed—he never forgot his roots in Charlottesville or his regard for UVA Engineering. When he died in 2016, he left a bequest of $2.25 million to the School. The funds are being used for programmatic support for leadership training and mentoring for students from populations traditionally underrepresented in engineering and to endow the Copenhaver Faculty Excellence Fund for Student Research. The income from the endowment will support Copenhaver Associate Professors in their work with graduate students.

Starting Off from Charlottesville

After completing high school at St. Christopher’s Episcopal School in Richmond, Edwin Copenhaver III returned to Charlottesville and enrolled in the University. During his second year, he formed a lifelong friendship with Weintraub, his Phi Kappa Sigma fraternity brother and roommate. “I think Ed had great affection for the University and enjoyed his time as a student,” Weintraub said. “He felt he got a great education there.”

Reconnecting after they were discharged from the military, Copenhaver and Weintraub bought Frager’s in 1975 and ran it together until Copenhaver retired in 2012. For a civil engineer like Copenhaver, helping customers solve practical problems was a dream come true.

UVA Engineering is applying Copenhaver’s bequest in ways that are consistent with his wishes and his lifelong interests. Copenhaver was a natural mentor, introducing generations of Hill teenagers to the professional and personal skills needed to contribute to a business and helping them find their bearings in what was often their first after-school job. “We were known for hiring high school kids,” Weintraub says. In some cases, Copenhaver offered to pay for their education, enabling a number to complete college and graduate school. “For the longest time, I didn’t know about his generosity,” Weintraub says. “He was self-effacing, but he was always a proponent of education.”

In an article about his retirement, Copenhaver explained to a reporter from The Hill Rag his enthusiasm for working with young people: “They are quick learners, energetic and pay attention to what you are telling them,” he said. The Engineering School’s leadership program follows Copenhaver’s lead by emphasizing entrepreneurship as well as other business topics.

Copenhaver also became interested in groups that were underrepresented in his profession. Frager’s was one of the first hardware stores in the District of Colombia to hire women, and when Copenhaver retired, his staff was more than 30 percent female. And since the store attracted customers from all backgrounds, Copenhaver and Weintraub always had a mix of employees on their staff.

UVA Engineering also hopes to identify a Copenhaver Associate Professor who shares Copenhaver’s interest in applying an engineering mindset to issues of environmental sustainability and resilience. His nephew, Peter Cook, reports that Copenhaver was interested in sustainable farming, biofuels, and electric vehicles—though as a true engineer, he would have preferred to build one himself. Even his love of sailing reflected his environmental sensibilities. He named his boat the Fuelless Pleasure.

Edwin Copenhaver’s life was shaped by many different experiences—but he always valued his time as an undergraduate engineering student at UVA. His generous gift ensures that future generations of students will have the benefit of that experience.