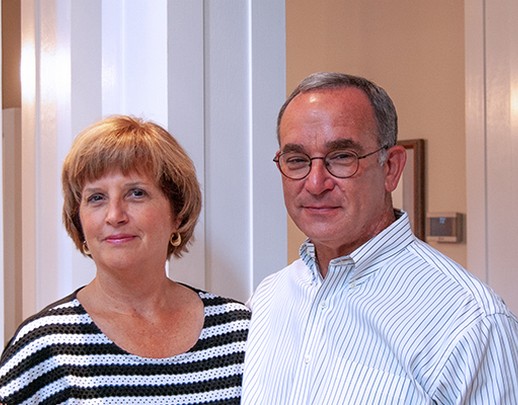 For the last 40 years, Russell Mait (Engr ’78) and his wife Barbara, have maintained a lasting connection to UVA Engineering. When deciding on where to attend college, Russell remembered a high-school teacher telling him, “The University of Virginia is where you have to go.”

During his time at UVA as a Chemical Engineering major, he relished the challenge of the strenuous coursework. Toward the end of his fourth-year, he was uncertain of his next step, but he had options. “UVA Engineering provided the opportunity to go to grad school, to meet with various industry connections and to basically do anything you wanted,” Russell said.

Ultimately, he decided to start a long career that led him down a path to meeting his wife, working in various chemical development companies and pursuing environmental health advocacy work in Washington D.C. Upon retiring, the Maits built a custom, Jefferson-inspired house with high ceilings, round columns and an octagonal floorplan.

When the Maits heard about the new planned giving society named after advisor and confidant, Jim Aylor, they knew it was the perfect opportunity to establish their legacy at UVA Engineering. Russell recalled, “When I heard about the Aylor Society, I said, ‘We’re in.’ We had to do this because he’s meant so much to our family.”

Jim worked alongside Russell’s brother Joe Mait (Engr ’79) and heavily influenced his son, Alex Mait (Engr ’17) to pursue a grad degree in engineering. “Jim met with him during his third year of college, told him exactly what courses to take and created a roadmap for him academically,” Russell said.

The Maits want future generations of students to have similar opportunities and their planned gift will go a long way in ensuring that comes to fruition. In reflecting back on his time at UVA and the ties that keep bringing him back, Russell said, “Every passing year, I can’t imagine how much more I can get from UVA. If there’s anything we can do to help out, we want to try.”