Some people were born to be connectors.

For two UVA Engineering alumni, building bridges is more than just creating physical pathways—it’s about supporting communities. Last summer, Leo Fernandez (Engr ’97) and Rupa Patel (Engr ’00, ’03) participated in a Bridges to Prosperity project where they spent two weeks constructing a 285 feet long suspended bridge to facilitate daily life for a small community in Rwanda. Their zest for service and volunteerism was fostered through their experiences at UVA.

Patel, a Washington D.C. native, followed a path to UVA by joining her sister in the School of Engineering. She studied at UVA for six years, obtaining her B.S. and M.S. in Civil Engineering, while also serving the local community as a certified firefighter and EMT for the Seminole Trail Volunteer fire department in Albemarle County.

“Volunteering as a firefighter and EMT remains one of the most fulfilling experiences of my entire life. I miss the department and my crew members every time I see a fire truck go by,” Patel recalled. “It was such a rewarding, amazing experience to be able to serve UVA and the community like that.”

In contrast, Fernandez took a different path. He was studying in the College of Architecture at the University of the Philippines prior to moving to New York in 1993. At the behest of his cousin, he applied to UVA as an out-of-state transfer student and was accepted into the civil engineering program. An internship at Parsons, where he designed repairs for suspension bridges, led to early-career work with short and long span bridges. From there, he received opportunities to work on some of the oldest bridges in New York, like the Williamsburg Bridge along the East River of Manhattan.

During his first few years after graduating, Fernandez was the Community Services Lead for the Virginia Club of New York. Through New York Cares, he organized events like painting murals and fences at public spaces and schools, clearing and grubbing at parks and running a coat drive during winter. 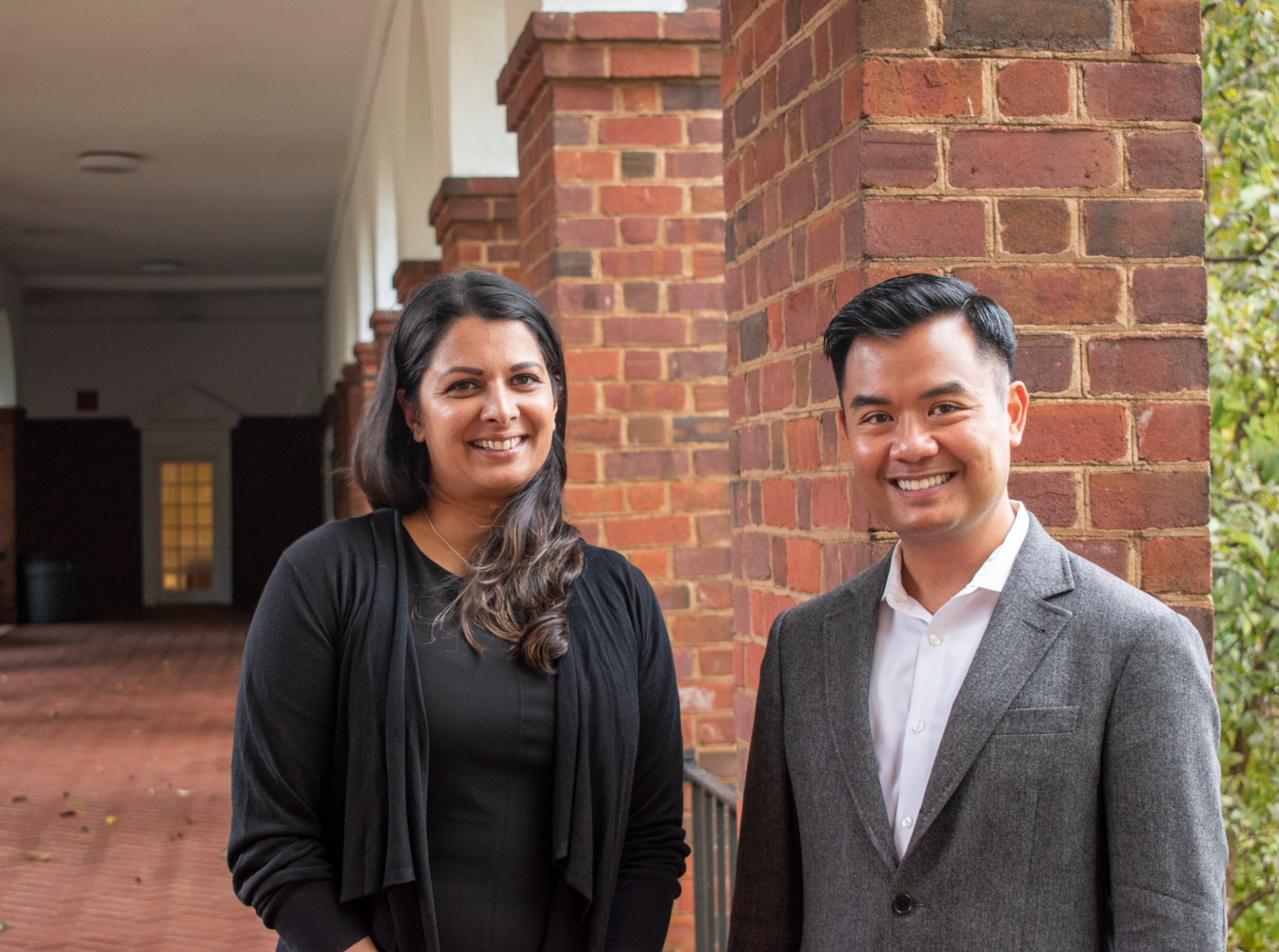 For Patel, putting things together just made sense to her. After working at a structural engineering design consulting firm for 12 years, she decided she needed a change. Through an industry friend, she took a position at Thornton Tomasetti which gave her the opportunity to work in New Zealand for almost three years. Instead of designing structures, she now takes the opposite approach and works as a forensics engineer to investigate damaged structures.

Fernandez, who also works at Thornton Tomasetti, and Patel both applied and were selected for a collaborative service opportunity through Bridges to Prosperity to create a suspended bridge over the Mwogo River in Serugeme, Rwanda. Despite a few phone calls beforehand, the two didn’t meet in-person until they arrived in Rwanda. They didn’t even realize they both went to UVA until their first meal during the trip.

“As I got to know Rupa, we found out we had a lot of things in common,” Fernandez said. “We just gravitated toward each other since we worked so well together.”

Shortly after their arrival, the team attended a local community gathering, initially thought to be a celebration of the new bridge. The excitement was palpable among the residents and regional government leadership.

“This community was getting a bridge and they're obviously very excited. But the celebration actually turned out to be a much bigger deal than we realized because this was also the first time this particular community were getting water and electricity,” Patel explained. “We got to be a part of this amazing celebration for an enormous milestone in their community.”

Fernandez added, “The moment we got to Rwanda was where everything that you had on your checklist immediately just became so real, far beyond your expectations. Starting off with the bridge, the setting was just magical. The beautiful mountains we had to hike through on a daily basis were surreal.”

The team completed the 285 feet long suspended bridge in two weeks—on budget and ahead of schedule. The magnitude and importance of completing the bridge was not lost on anyone. Since the community was providing 20-30 workers to work with the Thornton Tomasetti team, it was an authentic experience “to work and interact directly with the people that were going to be using the final product,” Patel said.

“During rainstorms in their monsoon season, they would have to swim across this raging river to get across, which led to multiple deaths, including kids. People didn’t have access to things like healthcare and basic necessities,” Patel reflected. “There were kids on one side of the river who couldn’t cross to go to school. This bridge allows them to go back to school. Just the realization that you really are helping to change even one child's life was so rewarding.” 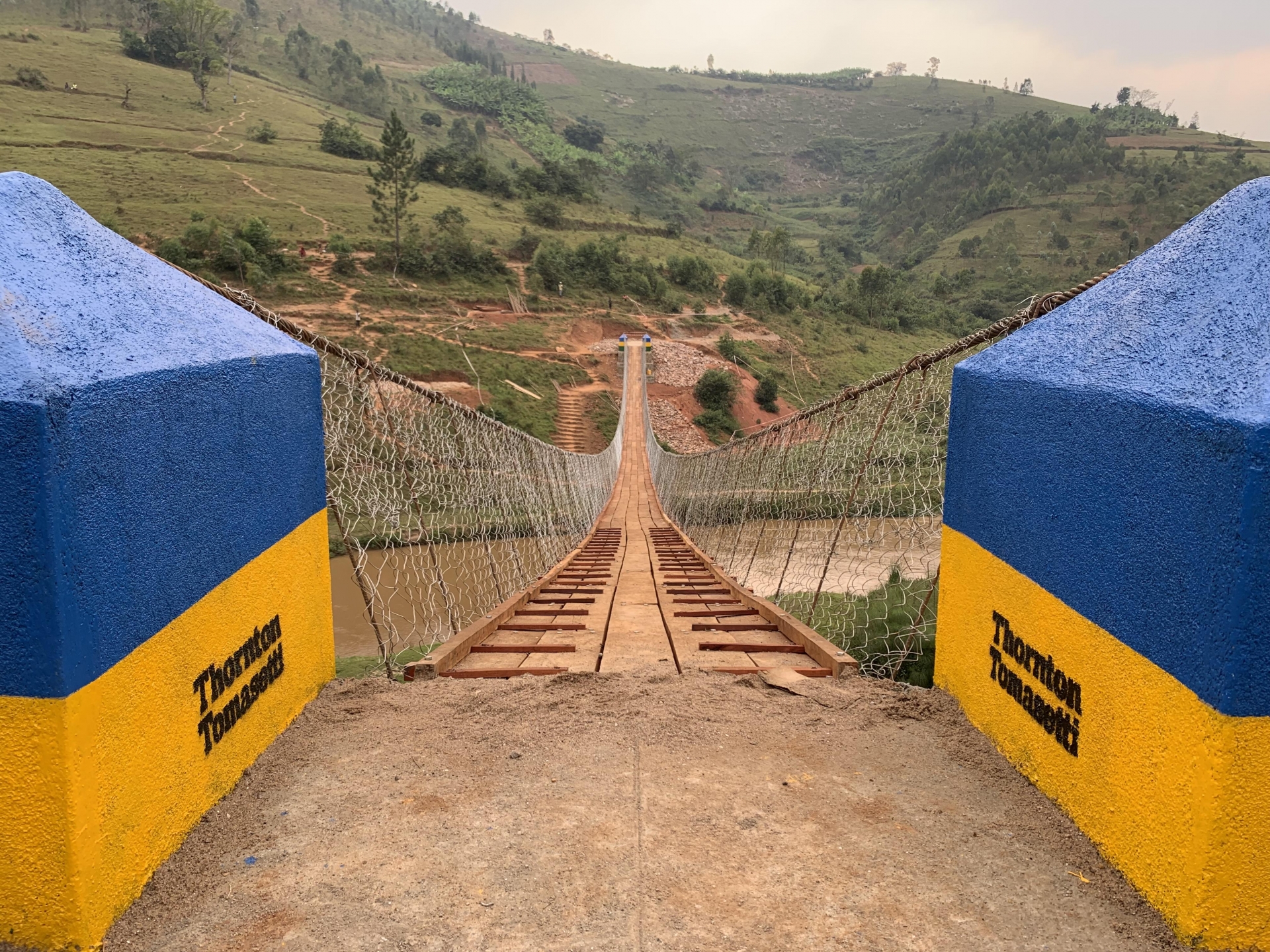 The University recently launched the Honor the Future capital campaign with a goal of improving the human condition worldwide through higher education. Along with President Ryan’s strategic goal of making UVA synonymous with service, the University continues to put an emphasis on producing graduates who serve the public good. Fernandez and Patel are both testaments to that ambition.

“The honor system made a profound difference in our experiences at UVA, so how can we extend that into the real world?” Fernandez pondered. “If you're true to yourself, then you are honoring not just yourself, but you're honoring the future as well.”