Underwater vehicles are typically designed for one cruise speed, and they’re often inefficient at other speeds. The technology is rudimentary compared to the way fish swim well, fast or slow.

What if you want your underwater vehicle to travel fast through miles of ocean, then slow down to map a narrow coral reef, or speed to the site of an oil spill then throttle back to take careful measurements?

Dan Quinn, an assistant professor at the University of Virginia School of Engineering and Applied Science, and his colleague, recent UVA Ph.D. graduate and postdoctoral researcher Qiang Zhong, discovered a key strategy for enabling these kinds of multispeed missions. They have demonstrated a simple way to implement this strategy in robots, which could ultimately inform underwater vehicle design. Their work was recently published in Science Robotics.

When designing swimming robots, a question that keeps coming up for researchers is how stiff the piece that propels the robots through the water should be made. It’s a hard question, because the same stiffness that works well in some situations can fail miserably in others.

“Having one tail stiffness is like having one gear ratio on a bike,” said Quinn, who holds joint appointments in mechanical and aerospace engineering and electrical and computer engineering. “You’d only be efficient at one speed. It would be like biking through San Francisco with a fixed-gear bike; you’d be exhausted after just a few blocks.”

It is likely that fish solve this problem by tuning their stiffness in real-time: They dial in different levels of stiffness depending on the situation.

The trouble is, there’s no known way to measure the stiffness of a swimming fish, so it’s hard to know if and how fish are doing this. Quinn and Zhong solved this by combining fluid dynamics and biomechanics to derive a model for how and why tail stiffness should be tuned.

“Surprisingly,” Quinn said, “a simple result came out of all the math: Stiffness should increase with swimming speed squared.

“To test our theory, we built a fishlike robot that uses a programmable artificial tendon to tune its own tail stiffness while swimming in a water channel. What happened is that suddenly our robot could swim over a wider range of speeds while using almost half as much energy as the same robot with a fixed-stiffness tail. The improvement was really quite remarkable.”

“Our work is the first that combines biomechanics, fluid dynamics, and robotics to comprehensively study tail stiffness, which helps to uncover the long-existing mystery about how tail stiffness affects swimming performance,” Zhong said. “What is even more fantastic is that we are not just focused on theory analysis, but also on proposing a practical guide for tunable stiffness. Our proposed tunable stiffness strategy has proved effective in realistic swimming missions, where a robot fish achieved high speed and high efficiency swimming simultaneously.”

Now that the team has modeled the benefits of tunable stiffness, they will extend their model to other kinds of swimming. The first robot was designed like a tuna; now the team is thinking about how they could scale up to dolphins or down to tadpoles. They’re also building a robot that emulates the undulatory motions of stingrays.

“I don’t think we’ll run out of projects anytime soon. Every aquatic animal we’ve looked at has given us new ideas about how to build better swimming robots. And there are plenty more fish in the sea,” Quinn said. 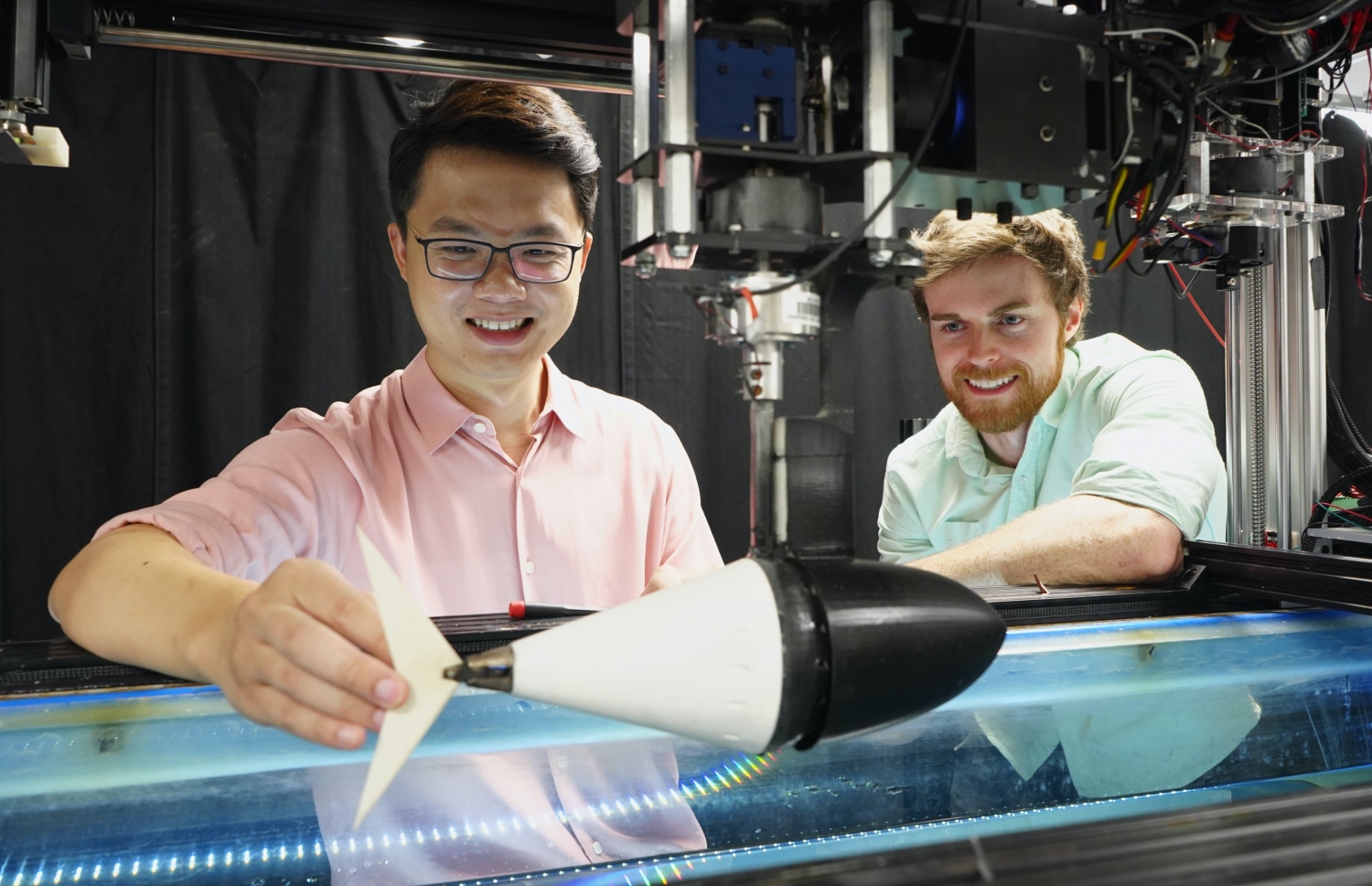 Assistant professor Dan Quinn, right, and postdoctoral researcher Qiang Zhong with the robotic tuna they designed to have a tail with tunable stiffness.