First, He Needs to Catalog All the Fibroblasts 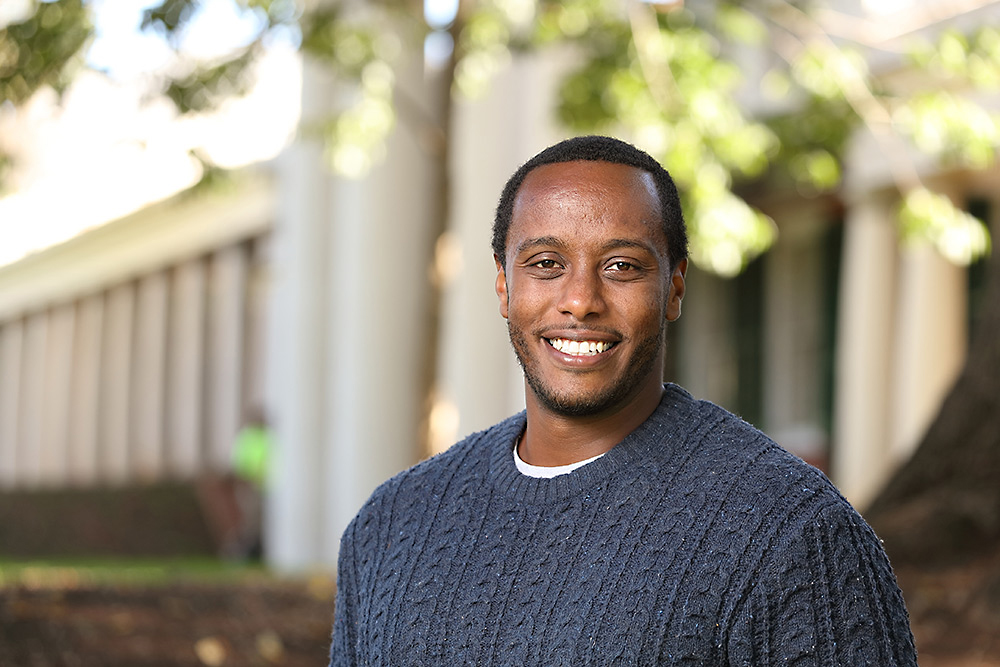 According to the National Institutes of Health, 45% of deaths in the United States can be attributed to disorders related to fibrosis, internal scarring that can affect nearly all tissues and organ systems.

Biomedical engineering post-doctoral fellow Dan Abebayehu at the University of Virginia School of Engineering and Applied Science has a plan to tackle fibrosis by identifying the different types of fibroblasts and determining how they work with immune cells after damage from disease or injury.

He thinks some types of fibroblasts could promote tissue regeneration, instead of facilitating scar formation.

“The goal of the field I’m in — immuno-engineering — is to try to tinker with the immune system to promote human health using the body’s own systems to change cells and control health outcomes,” Abebayehu said. “I want to find out if the immune system helps or hinders the tissue regeneration process.”

Abebayehu plans to combine two advanced measurement techniques — one of which was developed at UVA — that he hopes will reveal distinct types of fibroblasts.

The NIH is backing Abebayehu’s research with a MOSAIC Pathway to Independence Award (K99/R00), designed to support a timely transition of outstanding postdoctoral researchers from mentored research positions to independent, tenure-track faculty positions. In addition, the MOSAIC grants award individuals with a demonstrated record of promoting diversity in the biomedical engineering workforce.

The Prevalence of Scarring

“Scarring in organs and other tissues of the human body is very detrimental,' Abebayehu said. “We hear about many efforts to target inflammation, but what many people don’t realize is that the function of cells, proteins and molecules that make up inflammation are also part of normal biology, making it complicated to simply target them. More importantly, their dysfunction is a precursor to a key feature of many diseases, which is fibrosis.”

“For instance, when a patient has chronic inflammation in the lungs, it can lead to scarring called pulmonary fibrosis, where the scarring makes the lung stiffer and harder to breathe. The scarring is an accumulation of non-active tissue that usually grows unchecked until the increasing lack of oxygen results in the patient’s death,” Abebayehu said.

Fibrotic-related disease can happen in almost any organ.

Scarring can happen in the everyday course of medical treatment, too. Examples include the scar formation in the throat after intubation, as many patients who had COVID experienced, which could build up and block airflow in the trachea. Scar “capsules” can grow around medical prosthetic implants and prevent the implant from having its intended benefit.

“We want to figure out how fibrosis gets started. We hope to stop scarring from happening or even reverse it if it has already started,” he said.

Beauty in the Weeds

Immune cells that are present at the early stages of wound healing or tissue repair communicate with fibroblasts, the cells that are laying the scaffolding for either regenerative repair or scarring.

“There's a lot more communication or crosstalk between those two systems that has not been sufficiently characterized in the past and may hold the key to guiding the healing process in the right direction.

“We think there may be many flavors of fibroblasts,” Abebayehu said.

“The distinct types of immune cells and their functions are well documented, but whenever we talk about fibroblasts – which is trying to isolate tissue and isolate cells – the research community typically thinks of them like weeds: They take over everything and they're so annoying! One of the things that I've been trying to tell scientists is that I think there's some beauty in the weeds. I think these fibroblasts, like immune cells, might have distinct and non-overlapping roles.”

Abebayehu has combined two state-of-the-art tools to discover if fibroblasts come in different varieties with different roles after an injury.

First, he is using a system developed by materials expert and UVA biomedical engineering assistant professor Donald Richieri Griffin, a hydrogel system that has been proven to activate tissue regeneration. Griffin's hydrogel, which is a clear, Jell-O-like substance, is designed for applying to wounds to help skin grow back. The hydrogel stimulates responding healer cells — immune cells and fibroblasts — into behaving a specific way by providing them a template they recognize.

Abebayehu will re-purpose Griffin’s hydrogel system for testing his hypotheses about fibroblasts. By manipulating the different hydrogel chemistries, he will be able to create and observe different regenerative and fibrotic scenarios in a controlled environment. Since these processes are difficult to observe in a human body, developing an experimental environment is a critical step toward understanding what happens.

Second, Abebayehu is taking advantage of the new era of single-cell RNA sequencing. “We can identify nearly every gene that is expressed in every single cell in our samples,” Abebayehu said.

“Single-cell RNA sequencing has been incredibly helpful for studying disease states like IPF [idiopathic pulmonary fibrosis] and cancer. It’s just beginning to be used in the field of regenerative medicine.”

He will use single-cell RNA sequencing to identify the types of immune cells and flavors of fibroblasts that are active and interacting during the different scenarios in the specialized hydrogel environment.

Finding and cataloging the fibroblast flavors will be a great resource for both his own research and for others in the field of immuno-engineering.

It’s All About Control Dials

With detailed fibroblast information, Abebayehu’s next step is to create behavior models by manipulating variables to see if he can produce specific outcomes, a bit like building a control panel with dials he can adjust. For example, an adjustment to the hydrogel recipe or the number and type of fibroblasts present — as well as a multitude of other variables — could be combined to accomplish a desired outcome.

He plans to test the findings from his lab experiments using mice to see if his fibroblast flavor and behavior models hold up.

He also hopes to use his new fibroblast catalog to analyze different tissue taken from humans, like a fibrotic lung tissue biopsy, to see what flavors of fibroblasts are present and how this lines up with his existing models.

Abebayehu’s method of cataloging the immune cells and fibroblasts in play and creating behavior models using the hydrogel-RNA-sequencing combination for the inflammation pathway has the potential to allow researchers to analyze other disease pathways such as the development of cancer, idiopathic pulmonary fibrosis and heart disease.

More Than One Kind of Breakthrough

“I've always been drawn to medicine and health because of its ability to provide tangible ways to help people. Regenerative medicine and immuno-engineering are such compelling and imaginative ways to make healing possible in circumstances where it's typically too slow or doesn't occur at all,” Abebayehu said.

But he wants to take on even more than the battle against fibrosis. He's also intent on helping cut a path for fellow Black engineers and other underrepresented minorities in the engineering and STEM fields.

As a post-doctoral fellow, he has been an active member of the Department of Biomedical Engineering's Leadership Committee for Diversity, Equity and Inclusion, but he plans to do more, especially when he is a professor.

“I've been fortunate to have people who are really dedicated towards these efforts invite me to participate in the BME [Diversity, Equity and Inclusion] Initiative, and some who’ve mentored and empowered me from my earliest days as an undergrad to today, encouraging me every step of the way,” Abebayehu said. “I want others to have that experience and more.

“Most universities already have existing infrastructure that I hope to plug into. When I’m a professor, I want to make a meaningful contribution toward increasing representation and creating opportunities for others. I want to envision what is important for the inclusion of future STEM minority faculty and researchers and launch new initiatives that will build an even stronger system to attract and keep them,” said Abebayehu.

“I think I can generate a positive change.”