The World Health Organization has estimated that by 2020 road crash injury will be the third leading cause of disability-adjusted life years lost (a measure combining years lost from premature death with loss of health due to disability). More than 1 million people worldwide are killed in automobile crashes each year. In 2013 alone, 32,719 people were killed in road traffic crashes in the United States. While this total indicates the lowest fatality rate per unit population, per licensed driver, and per registered vehicle in the history of data collection, one person dies on America's roadways every 16 minutes and another 70 are injured.

Since road traffic fatalities most commonly result from injuries incurred during crashes, automobile safety research has been focused on injury biomechanics, structural crashworthiness, crash injury epidemiology, human behavior, and ergonomics to improve protection for vehicle occupants when crashes occur. However, new sensing and processing technologies indicated that crash avoidance and vehicle automation will play a central role in future of automobile safety. A core pillar of CAB's research, since its inception, has been in automobile safety. In fact, the CAB was known as the Automobile Safety Laboratory (ASL) from its inception in 1989, until becoming the Center for Applied Biomechanics. 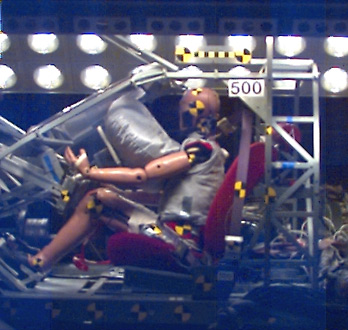 Occupant restraint systems are the primary tool by which safety engineers ensure occupants remain coupled to the vehicle during crashes to utilize the energy absorption characteristics of the vehicle structure. CAB's initial (mid to late 1990s) research into automobile restraints was focused on the effects of non-ideal restraint combinations including frontal airbags without belts, and shoulder belts without lap belts. Then CAB examined depowered and multi-stage airbags as well as the effects of airbag deployment when vehicle occupants are out-of-position. Additionally, CAB has designed, investigated, and worked on optimization of restraint technologies including force-limiting and pretensioned seat belts, side (thoracic) airbags, side curtain airbags, rollover curtain airbags, and knee bolster airbags. 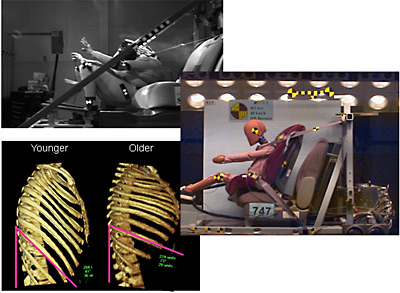 Traditionally, vehicle restraints have been developed and optimized for standardized anthropometries, like the mid-sized male or small female. However, as we learn more about how best to protect vehicle occupants in crashes we can focus on people that are more vulnerable in crashes including children, the elderly, and overweight adults. CAB has completed and continues working on several projects aimed at studying the biomechanics of aging, better protection for children in crashes, and, most recently, on the evaluation of a new obese crash dummy. 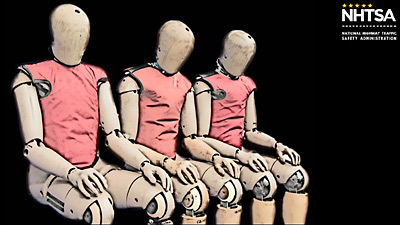 The Test Device for Human Occupant Restraint (THOR) anthropomorphic test device (ATD) is the latest generation of frontal crash test dummy. The THOR has arisen out of identification of limitations of the Hybrid-III, which is currently utilized in regulatory and consumer safety frontal crash tests. CAB has been played a central role in the development and evaluation of the THOR advanced crash dummy and advanced injury criteria for use with the THOR for more than 15 years. 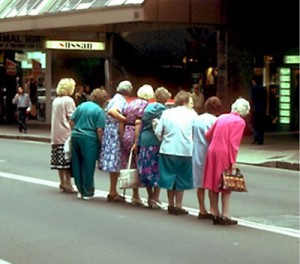 The interdisciplinary work at CAB is exemplified in our Pedestrian Research. The World Health Organization estimates that between 41% and 75% of road traffic fatalities are pedestrians, accounting for nearly 270,000 deaths worldwide (World Health Organization, 2013). Trauma data in the U.S. indicates that while the overall number of fatalities from motor vehicle collisions (MVCs) has decreased over the last 5 years, pedestrian fatalities have actually risen during the same time. Reducing this burden requires a combination of efforts, including roadway environment design, pedestrian collision avoidance, and passive protection through vehicle crashworthiness targeted at optimizing pedestrian safety. 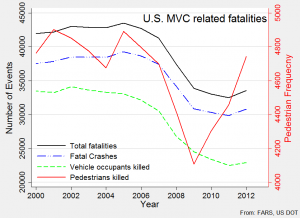 To accomplish this mission a wide variety of pedestrian-protection research has been led at CAB that includes (but is not limited to) epidemiologic studies describing the injuries and mechanisms occurring in the field, characterization of the human body's response to vehicle pedestrian impact at both component and full-scales, development of injury criteria that are used in regulatory and consumer injury assessment tests, examination of vehicle design solutions to reduce injury risks, and the development and evaluation of pedestrian test surrogates. 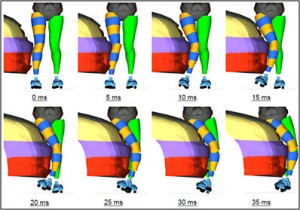 Multibody and finite element models of struck pedestrians provide a key tool for the design of injury-reducing countermeasures. The UVA-CAB has extensive experience in the development and validation of multibody and FE pedestrian models, including the development of detailed biofidelic models of pedestrian lower extremities. Once developed and validated, these models can be used for the parametric evaluation of the effects of collision characteristics, anthropometric characteristics, position, and vehicle design.

Finite element modelling at the UVA-CAB has included the development of anatomically-detailed models with tissue-level and structural biofidelity – much like the knee FE model displayed at the right, developed for simulating pedestrian impacts. These models, based on fundamental biomechanics, may serve as robust tools for injury prediction in scenarios such as pedestrian impact simulations. 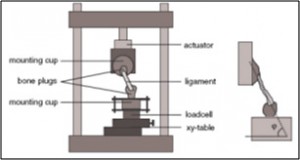 The development of anatomically-detailed models for injury prediction often requires experimentation to understand the mechanical behavior the constituent biological structures. The UVA-CAB has extensive experience and facilities for tissue-level material characterization, often tailoring test design to the specific needs of a particular application. For the development of injury-prediction models for pedestrian impacts, prior research has included investigating the viscoelastic and failure behavior of knee ligaments under impact-rate loading. 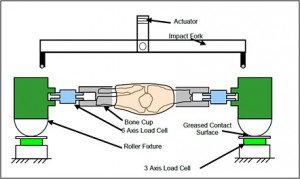 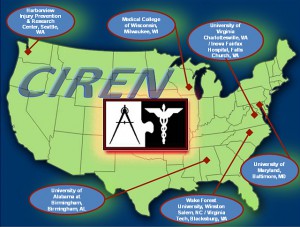 The Crash Injury Research and Engineering Network (CIREN) program, which was initiated by the US National Highway Traffic Safety Administration in 1997, brings together experts from medicine, biomechanics, academia, industry and government to perform detailed analyses of the injuries sustained in specific collision modes. Individual crash cases are identified by CIREN centers and detailed information regarding the crash, vehicle and occupants is collected, organized and reviewed in depth by a team of experts with the goal of identifying the sources and mechanisms of the injuries sustained during the crash. The UVA CAB, in a partnership with the INOVA Fairfax Hospital in Fairfax, Virginia, has been a CIREN center since 1999.

More than 1/3 of vehicle occupant fatalities occur in crashes that involve rollover. While the CAB has developed a dynamic test protocol to perform controlled dynamic rollover crash tests in the laboratory, CAB's rollover research has considered vehicle dynamics, structural crashworthiness, injury epidemiology and biomechanics, and physical and computational surrogate biofidelity analysis for the government and industry since 2009.