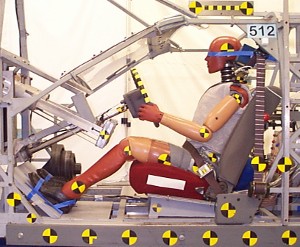 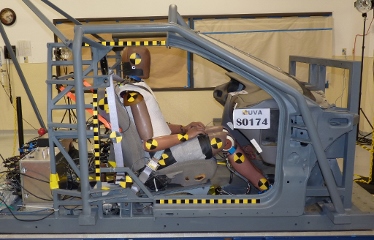 One of the auto-manufacturers constructed this front passenger compartment buck to CAB specifications using the body-in-white of a 1998 mid-sized sedan available in the U.S. market. A reinforced surrogate windshield is incorporated to properly direct the deployment of the top-mount passenger airbag.

CAB constructed this passenger compartment buck using the body-in-white of a 2014 mid-sized sedan available in the U.S. market. The buck was designed to maximize VICON camera views of the occupants and incorporates a custom “see-through” back support. Used mostly in the 20 degree frontal oblique orientation tests, but it can be oriented for a full frontal impact. 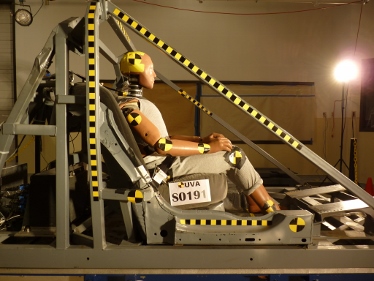 One of the U.S. auto-manufacturers constructed this rear passenger compartment buck to CAB specifications using a body-in-white (BIW) which was reinforced to withstand repeated tests. The buck can accommodate front passenger seats if occupant interaction with these components is included in the study design. 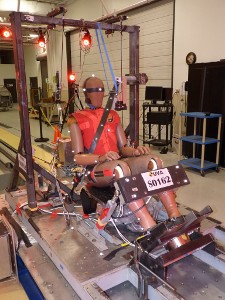 This buck consists of a rigid planar seat and bilateral rigid knee bolsters, pelvic blocks, and a 3-point shoulder and lap belt. Seat and belt restraint geometry approximates that of the front passenger position of a standard sedan and is fully adjustable. A wire frame back support allows 360 degree Vicon camera occupant views. The rigid support surfaces, instrumented with 5 and 6 axis load cells, facilitate computer modeling. 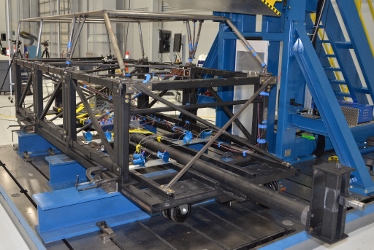 The parametric rollover buck consists of two major parts: a deformable, replaceable greenhouse (pillars and roof) and a rigid base. The greenhouse structure, when loaded in a static roof crush test reaches the strength-to-weight ratio level of real vehicles and when loaded in a dynamic rollover test, the roof deformation matches deformation magnitude and shapes observed in the vehicles from the current United States fleet. This buck approximates the geometry, mass, and mass distribution of a full-size crossover vehicle. The space-frame buck structure allows maximum Vicon and high speed camera views of the occupants. The restraint system is fully adjustable to accommodate both ATDs and PMHS.