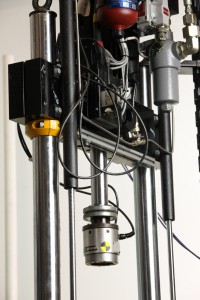 This universal test machine is typically utilized for component and small sample testing and the characterization of the viscoelastic properties of tissues. It is a compact biaxial servohydraulic testing system capable of applying axial loads of +/- 10 kN and torsional loads of +/- 100 Nm at rates approaching 2 m/s. The system allows the performance of quasi-static, step/relaxation, and rapid failure tests as well as cyclic, fatigue-type sequences. 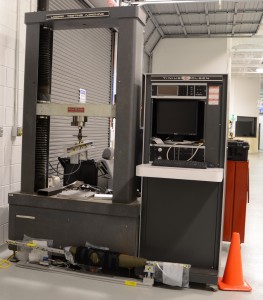 This computer-controlled universal test machine is capable of conducting mechanical property tests for biomaterials, metals, and composites. It has a load range of 0.002 to 140,000 N with a cross head speed of 0.05 to 50 cm per minute. The T.O. is used mainly for compression tests, tension tests, and bending tests. An expanded work area of 75 cm between machine columns permits full component testing of larger biological specimens. 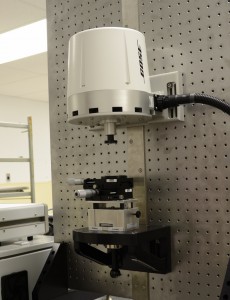 This universal test machine is typically utilized for small biological sample testing and the characterization of the viscoelastic properties of tissues. It is a compact bi-axial electromagnetic testing system capable of applying axial loads up to 200 N and torsional loads up to 5.6 Nm at a maximum rate of 3.2 m/s. The system allows for precision material tests including tension/compression, axial-torsion, multi-axis loading, fatigue, and dynamic material test. It is typically used for biomaterials and biological tissue, soft foams and rubbers, and other engineered materials.