Innovations in Fabrication offers state-of-the-art instruments, including a $10 million investment in specialized microfabrication tools, plus our one-of-a-kind, custom-built fabrication systems.

The IFAB is an ecosystem in which instruments for microfabrication and biofabrication are safely shared. The facility is designed with joint research in mind, enabling parallel processing of materials and devices with one set of protocols and a common fee structure. 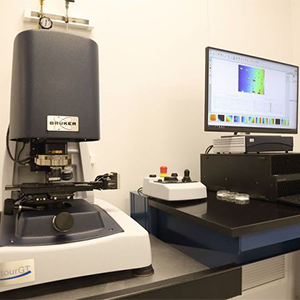 This optical profilometer complements our Bruker Dektak XT mechanical surface profilometer as critical metrology tools to determine film and etch depth thickness. The GTK-A optical profilometer, using white light interferometry with its stitching software, can contour map the surface of up to an entire 6-inch wafer with an RMS repeatability < 0.3 Angstroms. It is configured with field of view objectives of 1.0, 0.55, and 2X, along with primary objectives of 5, 20, 50 and 115X.
The digitally saved precise topographical map allows researchers to later examine any desired contour line to evaluate step heights and surface roughness on the wafer.

This system is configured with the Vision64 Map Imaging Topography Software. 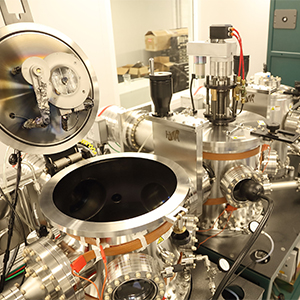 This custom system was configured in collaboration with AJA Inc, for ten magnetron sputter gun deposition. The system is used to grow Nb and NbN superconducting layers for HEB and TKIP applications, as well other metal and insulators films. It is composed of three chambers:

(i) loadlock, oxidation/nitridation for the growth of Al-oxide/AlN tunnel barriers, and rf sputter etch chamber for in situ wafer pre-cleaning;

(ii) a room temperature deposition chamber equipped with one 3” and four off-axis 2” magnetron sputter guns; and 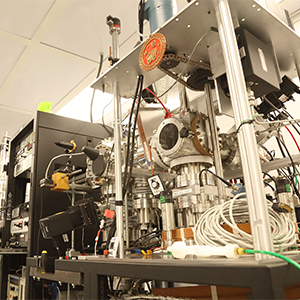 This is the fourth-generation superconducting materials deposition system designed and built by Arthur W. Lichtenberger and members of his research group. The system is composed of four chambers: (i) main deposition system equipped with four 3” magnetron sputter guns; (ii) loadlock and oxidation chamber for the growth of Al-oxide tunnel barriers; (iii) ion gun cleaning chamber for the pre-clean of wafers before deposition; and (iv) ICP plasma nitridation chamber for the growth of AlN tunnel barriers equipped with an in situ ellipsometer to monitor tunnel barrier thickness growth and an optical spectrometer to monitor the nitrogen plasma chemistry. 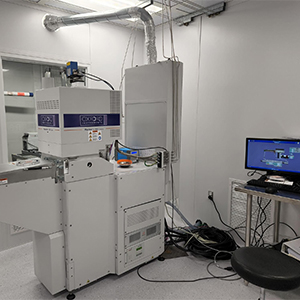 This load locked PlasmaPro-100 unit is configured with fluorine based active gases for optimal etching of silicon including high aspect ratio, through wafer vias. RF power to the inductively coupled plasma (ICP) realizes an adjustable density of ions to first order, independent of the RF substrate power. RF power to the substrate platter determines the platter voltage and hence the energy and directionality of the ions to the wafer layer to be etched. With independent control, the user can adjust the ratio of ICP to platter power to create etches that range from isotropic to anisotropic and from low to high etch rates. 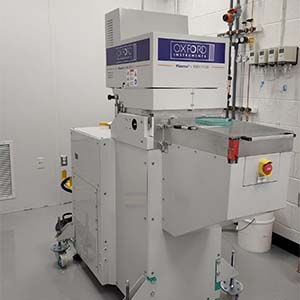 This PlasmaPro-100 unit is configured for inductively coupled plasma (ICP) chemical vapor deposition (CVD) of amorphous silicon (a-Si), silicon nitride (SiN) and silicon dioxide (SiO2) films. Temperature control of the platter (-20C to +400C) partially drives the growth rate. However, RF power to the inductively coupled plasma (ICP) until realizes an adjustable ultra-high density of ions which, along with modest RF power to the substrate, allows for much high quality film growth at much lower temperatures (as low as 150C), and with less surface effects than just plasma enhanced (ie, with just rf power to the substrate) CVD. With independent control, the user can adjust the ratio of ICP to platter RF power to create a wide range of deposition profiles.

The system is also equipped with a UV-VID CCD spectrometer to determine and adjust the silane based plasma chemistry for optimal film growth and endpoint. 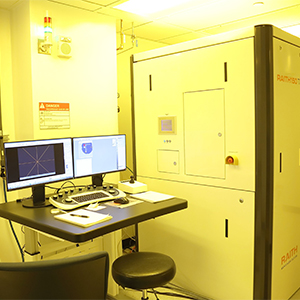 This load locked electron beam lithography system generates ultra high-resolution patterns as small as eight nanometers (0.008um) in electron beam resists. Included in this RAITH150-Two system are the traxx and periodixx options for stitching free wiring in extended lines and patterns, as well as in periodic structures.

The tool is also configured with automated height sensing for patterning on bowed wafers and/or extended topographical features, and with a dual-detector of secondary and backscattered electrons for high contrast imaging and alignment. To minimize time on the RAITH system, this Ebeam direct write tool can also be used in concert with the SUSS MABA6Gen4Pro in its UV250 mode to expose the larger features, and the RAITH system to expose the smaller features. 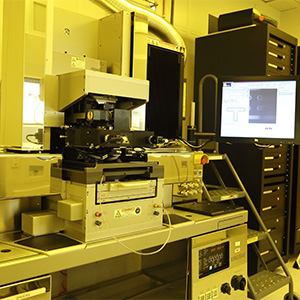 This mask and bond aligner performs high resolution photolithography or bond alignment of wafer to wafer or substrates to wafer. As a photolithography tool, the definition of resist patterns is critical to the realization of subsequent etching or depositions processes. Without manual adjustment, this mask aligner has the powerful capability to expose photoresists at three different wavelength bands: UV250nm (compatible with Ebeam resists), 300mn (optimal for i-line resists), and 400nm for both top-side and bottom-side geometries. The high-resolution optics allows patterning of resist features smaller than 0.5 μm. The tool’s pattern recognition and software permits operator assisted and auto alignment with a motorized stage permits down to 0.25 μm alignment accuracy.

As a bond aligner, the MicroTec wedge error compensation system guarantees high planarity between wafers while the tool aligns and clamps wafers in highly rigid and stable alignment fixtures to maintain the position during manual transfer to our SUSS Wafer Bonder. This approach realizes high precision, with better than 2um wafer to wafer alignment, and repeatability. The wafers can be pre-bonded in the aligner as well. 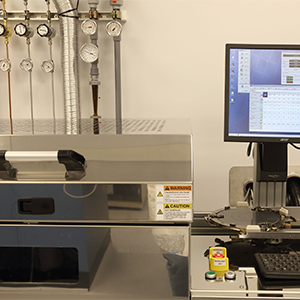 The XB8 is a state-of-the-art semi-automated bonding system that offers a wide range of bonding capabilities for bonding stacks of two or more wafers and/or substrate pieces. Tooling capability accepts pieces and wafers up to 150mm for bonding in several different configurations.

The XBD can be operated in the pressure range up to 60kN with a minimum bond force of 5kN, with two gas lines, heating and cooling rates of up to 30K/min and a maximum temperature of 500C.

Polymer as well as metal-to-metal bonding can be achieved with the XB8 bonder. 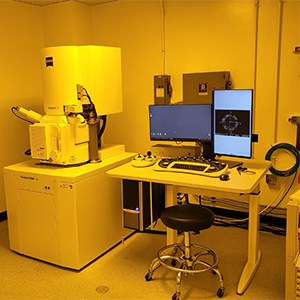 This FESEM allows the user to image the surface of a sample with sub-nanometer resolution, and hence is an indispensable metrology tool for microfabrication. This tool, with the Gemini-3 electron optics column, is the highest resolution (0.5nm resolution @ 15kV, 1.0nm @ 500V) and most advanced FESEM on the market. The FESEM is configured to enhance imaging of insulator materials, including the variable pressure (VP) imaging option.