Ph.D. students Antonios Valavanis, Anustup Chakraborty and Julissa Velasquez traveled to Isola di San Servolo this July to participate in the 7th Venice International School in Lasers in Material Science. A total of 38 Ph.D. students — including the three UVA and five other students from the United States — completed the intensive biennial summer program.

Working with world-renown lecturers, the students covered the mechanisms of laser-materials interactions and relevant experimental and computational techniques. They also joined round-table discussions devoted to emerging laser applications or new scientific discoveries. Each presented posters and oral presentations on their research.

Valavanis studies the thermal properties of carbon fibers and investigates material properties in the resulting surface nanostructures after short pulse laser processing, which he presented to his colleagues in Venice. 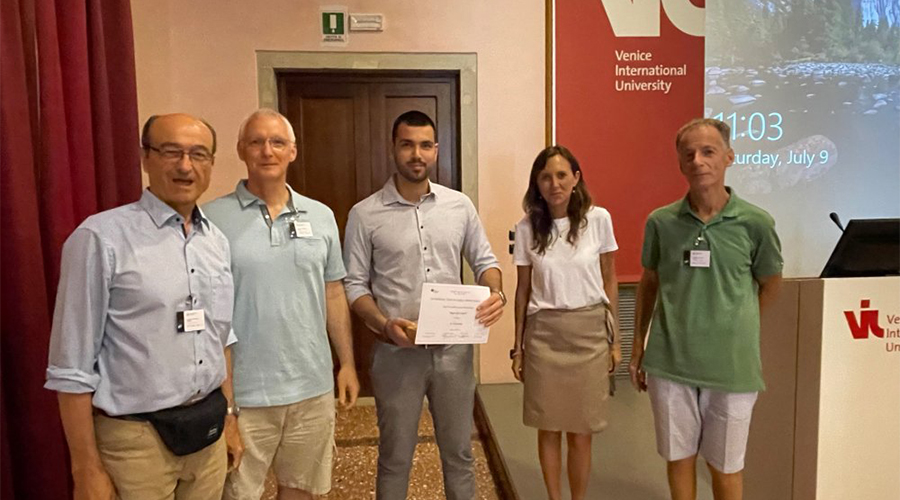 “The school gave me the opportunity to discuss, interact and exchange ideas regarding my project with specialists in the field of laser ablation as well as students from around the globe,” Valavanis said. “I established relationships with people with related projects, with whom I can discuss potential collaborations.”

The poster sessions spurred many fruitful discussions. Valavanis shared his data with a French student who is investigating the effect of material structure on surface wetting; held an in-depth discussion with a student from Crete on the effects of surface morphology for biomedical applications such as dental implants; and explored a new idea, to investigate the effect of surface nanostructure on friction, wear and lubrication properties of his material samples.

Chakraborty explored new methods of using laser plasma to characterize different properties of materials. His research focuses on laser micro-texturing of metals for enhancing adhesion of micropowders and producing superhydrophobic surfaces —picture a dew drop beading on the leaf of a lotus plant — working with Mool Gupta, Langley Professor of electrical and computer engineering at UVA.

“I gained insights and ideas for my own experiments,” Chakraborty said. “For example, I can use the laser plasma to understand how the surface temperature of my samples change. I also discussed a method to generate nanoparticles using lasers, which could potentially be used for my research to make thin films for photodetectors.

“I have never met so many students from different countries in a single place,” Chakraborty said. “It was a great experience to learn about different backgrounds, experiences and cultures, and to hear how other students got interested in working with lasers.” 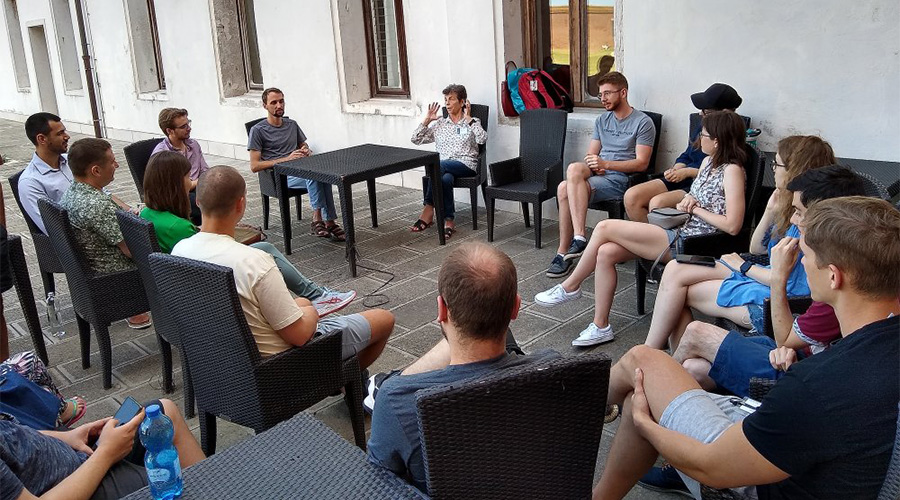 Julissa Velasquez conducts her research with Ian Harrison, professor of chemistry at UVA. Harrison and his students focus on catalysis, photochemistry, reaction kinetics and dynamics, contributing to a rapid transition from a petroleum-based energy and chemical economy to a more diverse and robust economy that runs on natural gas, hydrogen, coal, biomass and solar energy. Most industrially viable catalysis takes place on the surfaces of transition metal nanocrystallites dispersed on oxide supports. Velasquez’s research informs our understanding of gas-surface reactions on simplified scientific model surfaces.

“My research focuses on the chemistry occurring on a single crystal surface, so I often do not fully consider the full application of my work to the final industrial materials used,” Velasquez said. “Communicating with students in a field adjacent to mine, I gained insight into how my research method could be applied to determine the strength or accessibility of processing for new materials for applications.” Velasquez also refined her methodology, receiving feedback on how to change the optics in the laser beam path to avoid surface damage and how to adjust the repetition rate of the laser pulse to decrease laser power per pulse.

Velasquez is a first-generation student and first in her family to travel abroad to Europe.

“I gained self-independence by allowing myself to explore a city far from home alone,” Velasquez said. “I expanded my abilities to communicate about science and non-science topics with professors, colleagues and native Venetians. Seeing others be so passionate about their research rejuvenated my passion and reasoning for my Ph.D. work. I experienced being a foreigner and gained a new respect for persons who speak English as a second language.”

“Speaking Spanish, and building on it by studying the Italian language, I was almost successful communicating with native speakers,” Velasquez said. “I attended mass at the Basilica di San Marco, which connected me to the roots of Catholicism that I had not experienced before. The Basilica and the history of its architecture was amazing

“The museums had historical duality,” Velasquez said. “As there was modern art depicting human existence all while being housed in a building several centuries old. Just by looking up, you would see ceiling art as old as the building. Reflecting on the human existence of centuries past combined with modern art.” 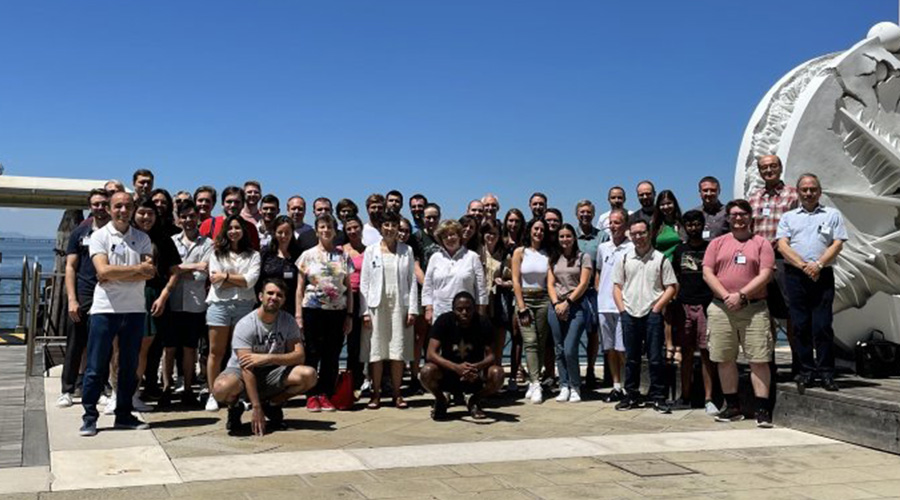 Zhigilei earned a grant from the National Science Foundation civil, mechanical and manufacturing innovation program that enabled all eight U.S. students to attend the summer school, with additional support for travel and expenses provided by the IEEE Photonics Society and the students’ universities.

“A number of well-established international conferences regularly bring together researchers working in the field of laser-materials interactions,” Zhigilei said. “What makes our school unique is that it aims to educate doctoral students in the principles of laser-surface interactions and bring them up-to-date with state-of-the-art in laser materials processing and manufacturing.”

Zhigilei has a long history with the Venice International School in Lasers in Materials Science, serving as an invited lecturer since the school’s founding in 2008. He served as a co-director of the school held in 2012, 2018 and 2022, and looks forward to co-directing the school in 2024.