Initial excitement about molecular electronics often stemmed from the idea that molecular transistors may somehow trump silicon-based transistors. Understandably, the electrical engineering community treated this with lukewarm skepticism. What is relatively under-stated in the field is that molecular electronics is more about electronics than about the molecules! Coming from a theoretical physics background, the first thing I learned was how little I knew about the good old transistor! It is perhaps foolhardy to discuss MoleFETs as future transistors without first forming a really good idea on what a regular transistor should look like, what its performance parameters (DIBL, subthreshold swing, gain) are, what the issues are that plague regular transistors (short channel effects, tunneling, etc), and what steps have been taken over the decades to mitigate them. In short, in order to make an impact on the field, you must first do your homework! It is not sufficient that we can build a molecule and attach leads to it – any more than we can hope to fly an airplane simply because we can build a runway and designate a take-off zone (read Feynman’s incredible lecture on cargo-cult science! It’s a lesson for every aspiring scientist).

Invariably therefore, simulated I-Vs of molecular transistors showed results that were much more modest than the grandiose pictures that often float around, and in fact, quite consistent with our understanding of all other transistors (FETs, ballistic FETs, SiNW and CNTFETs, MODFETs, etc). While a lot of effort still exists on finding the energy levels of a molecule, the fundamental driver behind FETs, the 3-D electrostatics, is usually the least discussed. It is easy to forget that the contacts are not infinite parallel plate capacitors (the resulting mundane electrostatics controls the entire property of a transistor!). Similarly, it is easy to forgot (but critical not to do so!) to include a gate oxide that would prevent charge from escaping directly into the gate! Anyway, once you put these in, especially a proper 3D Poisson electrostatics and a good description of the contacts into a model for a MoleFET, the two obvious things that our theory yields are in retrospect, quite expected: 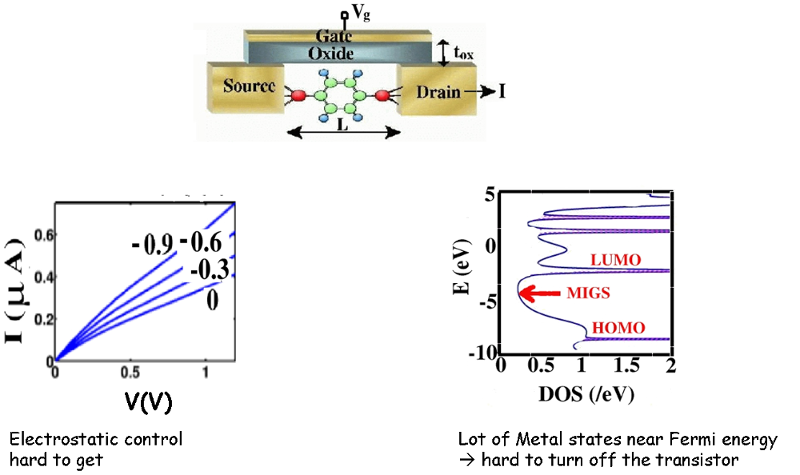 Molecular transistors must exploit properties unique to organic molecules, such as their conformational flexibility. Imagine a molecule whose parts can be rotated by coupling built-in charge dipoles with a transverse gate electric field. Turning a component away from conjugation would turn off the current. This has two significant advantages over electrostatic gating: 1. it exploits the directionality of the gate field over the drain – since the gate field is perpendicular to the plane of the molecule, a built-in dipole would preferentially couple to it even if the gate sits far away. We are thus utilizing a vector property of the gate, namely that its field is in a different direction than that from the drain. 2. Physically moving the molecule away from the conducting path cuts off the current abruptly, giving a subthreshold swing that depends on the ratio of the dipole moment to the product of the electronic charge times the oxide thickness.

In principle, this can be less than the textbook limit! (provided the dipole is large enough to circumvent thermal fluctuations). Most significantly, as we proved mathematically, the electronic and conformational gating components acted independently (owing to the large separation in their time scales), so that their subthreshold swings added in parallel . Thus, even if the conformational gating is slow enough that only a fraction of it is executed over the electronic transit time, it nonetheless serves to lower the intrinsic swing of the electronic degrees of freedom.

A good non-charge based transistor must thus exploit vector properties of the field such as dipoles or spins, and should use the non-charge based degrees of freedom as an additional cut-off filter to reduce the OFF current rather than enhancing the ON current. Furthermore, the electronic and non-electronic degrees should be oppositely correlated, and should be robust with respect to thermal fluctuations.