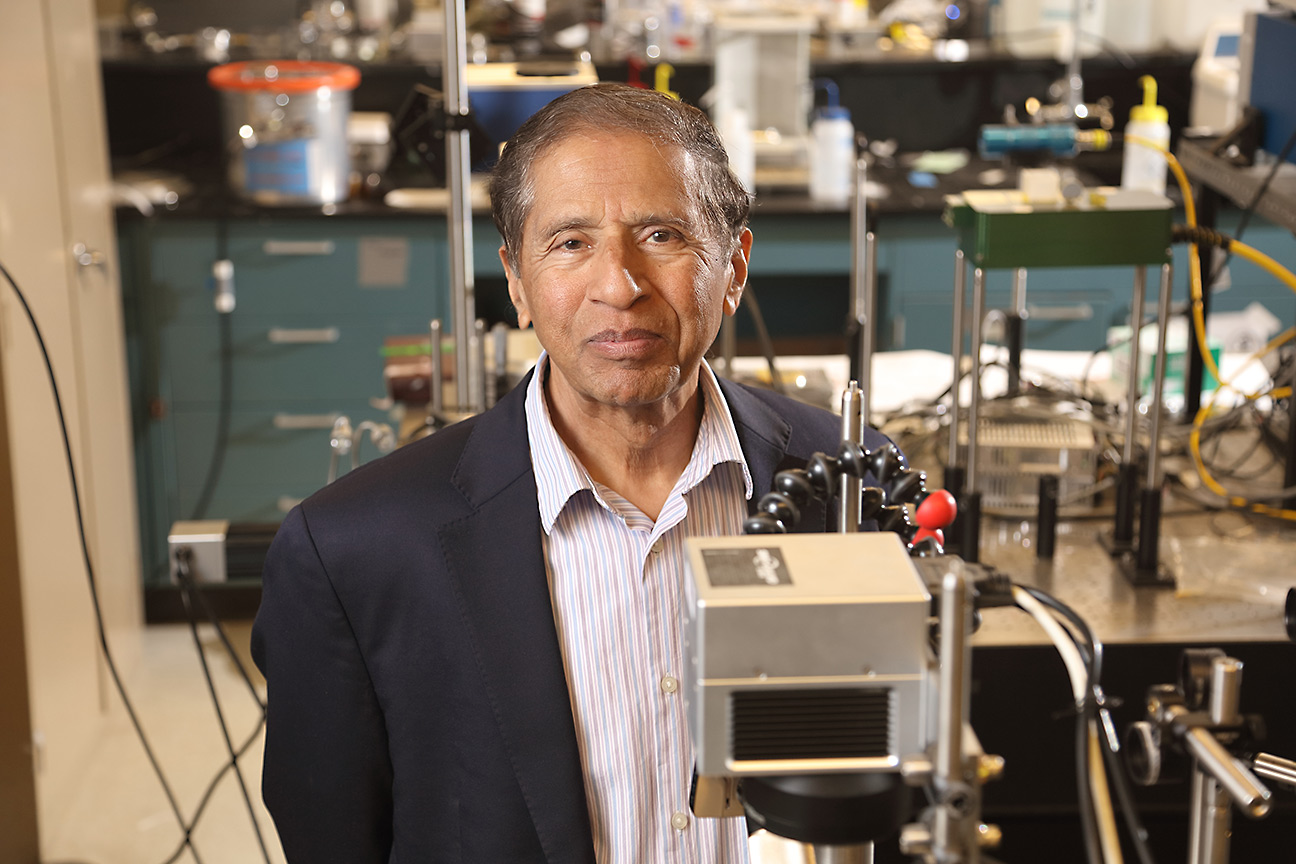 While all of us were celebrating the mainstreaming of solar energy, Mool C. Gupta, the Langley Distinguished Professor in the University of Virginia’s Department of Electrical and Computer Engineering, was many steps ahead. He recognized the inherent flaw in the sustainability of solar energy: what to do with old solar panels.

Piling up junk in landfills would offset gains made from green energy.

Using his expertise in high-power lasers and nanomaterials and a grant from the U.S. Department of Energy, he focused on a reuse-recycle solution. With the precision that can only be accomplished using a laser beam, he figured out how to remove silver from retired photovoltaic cells so it could be used again on new panels and other applications.

Recycling silver had the additional benefit of conserving a valuable natural resource. Eight percent of the world’s silver is used in creating solar panels. Without recycling, the life span for solar panels as a viable green option might be limited. He also demonstrated that the solar panel recycled silver can be generated in nanoparticle form, which would have applications in biomedical, health care and more, due to their unique optical, electrical and biological properties.

These are just some of the ways Gupta has served society over his career. For his contributions, he was recently elected to the National Academy of Inventors. Gupta is also the founding director of the NSF Industry/University Cooperative Research Center for Lasers and Plasmas at the University of Virginia.

Another way he is contributing to the green energy revolution is by helping solve problems with renewable initiatives, like improving wind turbines. In colder climes, ice can wreak havoc on wind turbine blades. Gupta is using lasers to etch a specialized design on the surface of the blades so the ice will not stick and cause the turbine blade or tower to break.

Gupta, who teaches a class in solar energy, formed a team of students who designed solar panels to power wheelchairs that run 40% longer than other vehicles. The team won the grand prize in an inventor’s competition that was part of the World Cerebral Palsy Day’s Change-My-World-in-One-Minute campaign.

Another project of Gupta’s is illuminating the dark parts of the moon. While many of us are enamored with the idea of living off-planet, and some tech giants are building crafts to get there, Gupta is helping to make living there a reality by inventing a key infrastructure component: a way to capture energy and transmit it reliably. As part of this project, Gupta was a chair of the panel on the development of a technology roadmap for NASA agency in the area of materials and manufacturing technologies, organized by the National Research Council.

While solar panels can gather energy in the light areas of the moon, expeditions to the dark areas — craters that have been dark for billions of years — are limited to the length of battery life. There are no Tesla charging stations yet!

As a part of NASA’s Artemis program, he is designing a solution that involves beaming energy with lasers from a lighted area to a dark area — a type of relay. As simple as this might sound, creating the laser paths and the technology that will convert laser energy into light and usable energy is no simple matter.

“This solution could also be used Earth-side for wirelessly transmitting energy to critical structures such as powering hospitals during a natural disaster,” Gupta said.

Speaking of the moon, Gupta is now using laser tech to find out if there are signs of extraterrestrial life on the moon, tech that could be used to explore Mars and beyond.

Gupta’s futurist innovations started early in his career. While working at Eastman Kodak Company, Gupta paved the way for optical recording technologies like CD’s by inventing a laser write-over method. Gen-Xers can thank Gupta for being able to create their own mix CDs — instead of using cassette tapes! — and others benefited from recording their favorite shows on DVDs before on-demand streaming. The company honored Gupta by inducting him into the Eastman Kodak Inventors Gallery in 1998.

The laser read-write technology for data storage is still being developed today for storing terabytes of data instead of gigs for long-term archiving and data backups.

Lasers seem to go everywhere, at least with Gupta at the helm. He is using lasers and light sources to detect corrosion on U.S. Navy ships, defects that are not visible or detectable under the paint, using other methods. This saves the Navy millions in repair costs because they only need to fix the ships that have faults. Before this solution, they had to do an overhaul on every ship periodically.

Gupta founded the NSF Industry/University Cooperative Research Center for Lasers and Plasmas at the University of Virginia. For seventeen years, the center has been a strong collaborative effort that has six university members and 22 industrial members, including General Motors and Lockheed Martin.

“The center is a really powerful collaboration,” Gupta said. “We are able to focus on practical applications so the projects can translate much more quickly into technology that is useful to society.

“The industry-university collaboration is also an important paradigm for students to experience.”

Gupta is the editor-in-chief of the Handbook of Photonics, a Fellow member of the Optical Society, a Fellow of the IEEE Society, and has more than 250 scientific journal publications and 30 patents to his credit.