Consortium for the Advanced Analysis of Apollo Samples 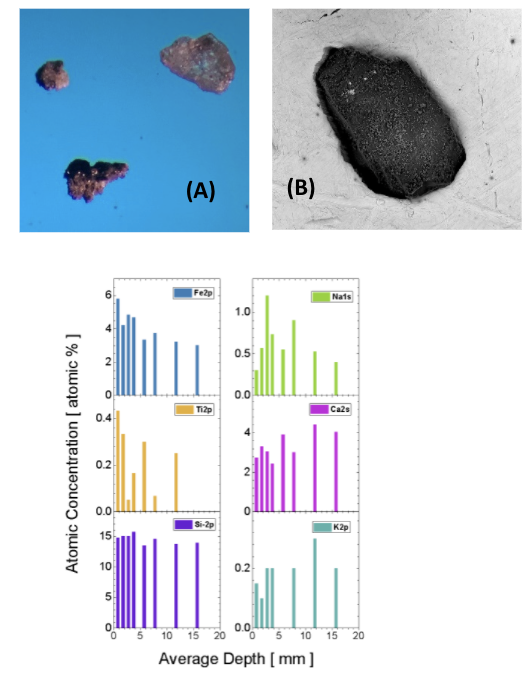 Half-a-centurty after the Apollo 11 manned-landing on the lunar surface, NASA released a number of previously unexamined core samples for analysis by new/improved scientific techniques. This pristine regolith includes landslide material collected near Station 3 within the Taurus-Littrow Valley on the southeastern edge of Mare Serenitatis [1-3]. Double-drive tube samples from Apollo 17: 73002 (upper ~22 cm) and the 73001 (below ~22 cm) are part of the released samples, where 73001 has been stored since 1972 in a Core-Sample Vacuum Container (CSVC) to better retain lunar volatile species (H2O, Na, K, etc.). Sample 73001 has remained sealed since lunar acquisition. Native stratigraphy of the collected material remains preserved in the tubes, allowing analyses of grain composition, volatile content, and space-weathering products to be evaluated as a function of depth.

XPS was used to determin the surface composition of 2-5 lunar grains within each interval, regardless of parent mineralogy.  All grains were found to contain: O, Si, Al, Mg, Ca, Fe, Na, C, and F, with many grains also retaining Ti, K, and S throughout the entire 73002 core. Identified species are similar to elemental bulk compositions as measured by EDAX, which additionally noted Cr, Mn, and Mo in low concentrations in some particles; F was not noted in the bulk analysis. Subsequent XPS analysis of grains (73002, 257) after in situ sputtering by 1 keV H removes much of the F, which appears to be ≤ 1 mono-layer, and may be the result of sample collisions with the PTFE-capped containers during transport.